It has been suggested that Joseph Keilberth was once asked to become conductor of the Berlin Philharmonic Orchestra but turned it down out of respect for his mentor, Furtwängler, leaving the post instead to the orchestra's second choice, one Herbert von Karajan. The rest, as they say, is history. Nevertheless, Keilberth is once again gaining recognition as a great conductor, with his live recording of Wagner's Seigfried from 1955 gaining a Recording of the Year award in the 2006 Gramophone Awards by a clear and substantial lead in the voting.

In that same year as he was conducting Wagner at Beyreuth, his own orchestra, the Bamberg Symphony, continued to record in the studio for Telefunken. We recently issued their interpretation of Mozart's Eine Kleine Nachtmusik (PASC057), recorded in 1953, and in 1954 we find them tackling Schubert's delightfully lyrical and melodic Sixth Symphony.

A youthful work, Schubert completed it in 1818 at the age of just 21, it may not rise to the artistic peaks of the later 'Unfinished' and 'Great' symphonies (available here in recordings by Wood, PASC041, and Walter, PASC014, respectively), and occasionally shows its influences, it is surely impossible to fail to find charm here. The Scherzo in our sample movement may start out sounding suspiciously like Beethoven but is handled exquisitely by Schubert, and played with great care and precision.

All in all a fine recording of one of the lesser known Classical symphonies that surely deserves a fresh listen! 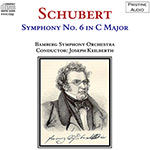