NB. A previous restoration of this recording is also available as part of a double-CD set on PASC580, coupled with Bruckner's Symphony No. 7

"Bruckner's work has accompanied me in my whole conscious existence as a musician”
– Wilhelm Furtwängler, Ton unt Wort, Essays & Lectures (1918-1954)

“Eighteen concerts were given in seventeen cities between 5 and 29 October of [1951], and included were six performances of the Fourth. The major difference between the Fourth recorded in Stuttgart on 22 October and that recorded in Munich on 29 October lies not in interpretive characteristics (these were a matter of varying intensity levels and the concentration of the conductor and his musicians more than anything else), but in the sound of the two sets.

The Fourth in Stuttgart has enormous presence, range, and fullness, with the Viennese strings probing deeply into their parts, while in Munich the recording is thinner, flat in its perspectives, and plagued by a high degree of extraneous audience noise. Yet both versions again leave no doubt of Furtwängler’s profound and individual insights into this score. One virtue of the postwar performances that is not easily perceived in the wartime Fourth is Furtwängler’s view of this Symphony as a two-part work. As was the case with his performances of Beethoven’s Sixth Symphony, he links in stride and mood the Fourth’s first two movements.

So successful is Furtwängler in implanting this view, that the opening horn calls of the scherzo come as a jolt. There is no doubt that we have entered a new and more brilliant landscape, beyond dreams and amorphous impressions to a more realistic realm. From the scherzo through the finale, there is a sensation of moving forward and reaching out, of being vividly propelled towards the Symphony’s final, blazing pages. There is one intriguing textual difference between the 1941 performance of the scherzo and those in 1951. After the war Furtwängler played the da capo of the scherzo intact, while in the 1941 performance he makes a cut of sixty-eight measures (bars 25-92), an option offered in the Schalk-Löwe edition.”

This live recording of Bruckner's Fourth Symphony was made by Bavarian Radio at a concert in the Deutsches Museum in Munich on 29 October 1951. Coupled with the two other works performed that evening, Beethoven's Cariolan Overture and Schumann's Symphony No. 1, it first appeared on a Decca LP release in 1973. This was not a particularly well-received release, heavily criticised for the "pretty dim" sound quality and the "constant barrage" of "coughing, sneezing, shuffling and even knocking and banging" - which played "a really destructive part" that made enjoying or even listening to the performance very difficult indeed. This edition aims to address both issues: the 'dim' sound quality of the original is unrecognisable in this glorious-sounding Ambient Stereo XR remaster, whilst the majority of the "audience participation" has been either excised or diminished as much as is currently feasible.

Cover artwork based on a photograph of Furtwängler
Recorded by Bavarian Radio at Deutsches Museum, Munich, 29 October, 1951 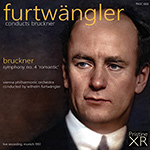