The two recordings offered here have both suffered historically from relatively poor sound quality, especially in comparison to contemporary recordings of Furtwängler conducting the same material. In his 1994 book "The Furtwängler Record", John Ardoin comments: "The major difference between the Fourth recorded in Stuttgart on 22 October and that recorded in Munch on 29 October lies ... in the sound of the two sets. The Fourth in Stuttgart has enormous presence, range and fullness ... while in Munich the recording is thinner, flat in its perspectives..."

With regard to the three post-war Sevenths (Berlin, 1949, Rome 1951 & the present, Cairo, 1951), Ardoin notes: "There is more detail in the Berlin and Rome performances than in the less stable one from Cairo, and the Berlin recording has an edge over the Rome with its more immediate sound."

In each case he refrains from claiming great differences in performance between each of the extant recordings: "there is little to differentiate the three performances" (7th Symphony), "the major difference ... lies not in interpretative characteristics" - and, crucially: "both versions again leave no doubt of Furtwängler's profound and individual insights into this score" (4th Symphony).

This of course was a judgement made some 25 years ago, and much has changed since then in the world of music restoration and remastering technology. Nevertheless, recent reissues of this material have apparently failed to tackle the inherent sonic problems outlined a quarter of a century ago, and it is for this reason that I decided to take them on myself.

XR remastering equalisation has in both cases made a huge improvement to the orchestral sound, which is in both cases transformed and further enhanced by Ambient Stereo processing to give each performance a sense of space.

Both recordings required additional and innovative technological solutions to their individual problems, though after much experimentation I felt the somewhat higher hiss levels heard on the Cairo recording were tolerable by comparison to the loss of fine details when I attempted to reduce them any further.

The results will, I hope, suffice to rehabilitate these superb performances' places in the Furtwängler catalogue and, possibly, allow them to be rediscovered and reinterpreted by those previously put off by audio quality. 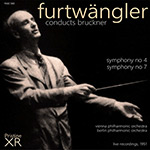