The present release is the second of two devoted to the handful of extant live broadcasts of Max Fiedler (1859 – 1939). Fiedler has come to be known as something of a Brahms specialist, in part because he was one of the few conductors who had a direct link to the composer to have recorded his works, and in part because his commercially-recorded oeuvre consists solely of four Brahms works: the Second and Fourth Symphonies, the Academic Festival Overture, and the Second Piano Concerto with Elly Ney (all collected on Pristine PASC 363).

This focus on Brahms, however, has tended to obscure his achievements with other composers; and for those, we have had to rely on a slow trickle of German Radio recordings which have come to light over the past two decades. Our earlier volume (PASC 547) presented Fiedler in works by Mozart, Beethoven, Schumann and Tchaikovsky, as well as Brahms. Releases on other labels have featured more Schumann and Brahms, including the two concertos in this release. With the publication of the Haydn and Schubert symphonies here, Fiedler’s complete recorded repertoire is at last available.

The first thing that will be evident to listeners of these recordings is that they boast higher fidelity and more impactful sound than most other broadcasts that have come down to us from the mid-1930s. This was a result of German Radio’s practice of preserving the performances not on the then-common media of aluminum or acetate discs, but by recording them like a commercial release – on wax masters, plated, and pressed on shellac. A small number of copies were struck and sent to radio stations for delayed broadcast. Time and the vicissitudes of war have made them scarce, resulting in some of the performances presented here being incomplete. As MusicWeb International critic Jonathan Woolf wrote with regard to our earlier volume, “These torsos are regrettable, but I am sure collectors would rather have the large amount that does remain rather than condemn what is missing, about which nothing very much can be done, in any case.”

In both the Haydn and Schubert symphonies which open our program, the initial Adagio and Andante, respectively, are missing; so we do not get to hear, for example, how Fiedler transitions into the Schubert's Allegro. But the remainders of both works are complete, and allow us to enjoy Fiedler’s energetic and characterful performances, very much in the 19th Century “big orchestra” tradition that he learned from Hans von Bülow and Fritz Steinbach.

The Brahms Double Concerto is, regrettably, more a case of fragments than even a torso. Nevertheless, it is ear-opening in that the approach is so much different from the kind of performance to which we have become accustomed, with the soloists in the first movement seeming to present a story of storm-tossed lovers, rather than dueling virtuosi (see Heifetz/Feuermann, among others), although to what extent this was Fiedler’s vision or that of the Steiner brothers is unknown.

While the Double Concerto has seen limited CD availability previously, the D minor Piano Concerto has been more widely available, although this release is the first in which the wayward pitch of the last three minutes (which comes from a different and much inferior source than the rest of the work) has been corrected via Capstan software. The soloist, Alfred Hoehn, who had bested Arthur Rubinstein for first prize in the 1910 Anton Rubinstein competition in St. Petersburg, recorded very little, but enjoyed a reputation as a pianistic poet with a vast dynamic range (on full display in the second movement of the Brahms). The first movement is remarkable in its length, proving that an extremely broad tempo here was not a Glenn Gould innovation, but may extend back to the composer himself, through his disciple, Max Fiedler. 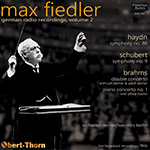