Max Fiedler (1859 – 1939) has come to be known as something of a Brahms specialist, in part because he was one of only two conductors (Weingartner being the other) with a direct link to Brahms to have recorded his works, and in part because his commercially-recorded oeuvre consists solely of four Brahms works: the Second and Fourth Symphonies, the Academic Festival Overture, and the Second Piano Concerto with Elly Ney (all collected on Pristine PASC 363).

This focus on Brahms, however, obscures his achievements with other composers; and for those, we have had to rely on a slow trickle of German Radio recordings which have come to light over the past two decades, starting with a CD release on the Music & Arts label in 2001. To date, these have featured not only more Brahms (the Violin Concerto with Siegfried Borries, the First Piano Concerto with Alfred Hoehn and the Double Concerto with Carl and Adolf Steiner) but also Schumann (the Spring Symphony) and Mozart (Piano Concerto No. 24 with Lubka Kolessa). This release and one to follow will make available for the first time all of his remaining extant live broadcasts, as well as reissue some of those already available in, hopefully, improved sound. None of the selections on the present issue, to my knowledge, have been previously released.

The first thing that will be evident to listeners of these recordings is that they boast higher fidelity and more impactful sound than most other broadcasts that have come down to us from the mid-1930s, like the Toscanini/New York Philharmonic broadcasts or the Bodanzky/Met Götterdämmerung. This was a result of German Radio’s practice of preserving the performances not on the then-common media of aluminum or acetate discs, but by recording them like a commercial release – on wax masters, plated, and pressed on shellac. A small number of copies were struck and sent to radio stations for delayed broadcast. Time and the vicissitudes of war have made them scarce, resulting in some of the performances presented here being incomplete.

The second observation is that these performances represent an approach to interpretation the likes of which, for better or worse, we do not hear today. From the lovely but rather romanticized Mozart through possibly the most portentous and dramatic Beethoven Fifth one is likely to encounter, we are hearing not so much Brahms’ disciple as Hans von Bülow’s, according to the late critic Christopher Dyment. Frequent tempo changes, distended chords (particularly in the Beethoven), unexpected inner voices being brought out and Luftpausen were part and parcel of the approach Fiedler learned when he began his conducting career in the mid-1880s. These broadcasts are a direct sonic link to that era, and an ear-opening experience to listeners today. 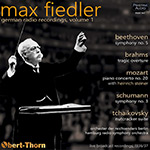