Each of the concert broadcasts ran for longer than was usual, and it has been necessary to trim some of the commentary from these recordings in order to fit each one onto a single CD release without cutting any of the music. The amount of speech editing will vary from release to release, but the intention is to preserve as much as possible the occasion as heard some 80 years ago - this is, we believe, the first time they have been presented as broadcast in this manner.

This fifth concert contained significantly less music than any of the other concerts, and so we have been able to retain much more of the radio commentary. In general where this is lengthy it has been tracked separately so that it can be skipped if required. It is the only volume where we have been able to include the interval talk by Samuel Chotzinoff, who looks into the impact on Beethoven of his brother's early death and the ensuing difficulties over the adoption of his nephew and the ultimate effect of this emotional trauma on Beethoven's later work. Including this talk, which lasts almost 9 minutes, meant some minor editing in other links and the loss of the pay-off after the final applause had been faded out, but otherwise it offers a much closer impression of the actual radio broadcasts than has been possible in the other volumes of this series, due to the time restrictions inherent in audio CDs.

As with the previous volumes, the sound quality here is once again excellent, if a little less "open" in its dynamic range as a result of a degree of audio compression used at the time of broadcast to limit peak volumes. The audio sample here of the opening movement of the Symphony No. 8, which you're hearing in its 320kbps MP3 format, gives a good example of the otherwise excellent sound quality to be heard throughout this volume. 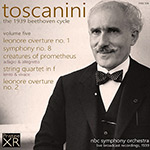 The fifth broadcast concert of Toscanini’s Beethoven cycle with the NBC Symphony Orchestra took place last night at Radio City. Of the master’s physical life, the program traversed the first three decades of the nineteenth century. Of his creative life, it spanned a distance that is unequaled in the realm of music. There were the “Leonore” Overtures Nos. 1 and 2; the Eighth symphony, and excerpts from the ballet “Prometheus”— products of the earlier years. And there were the middle two movements of the F major quartet, Op. 135, which came the year before the master’s last. Toscanini has simply transferred the original quartet parts for full orchestral strings and fortified the ’cellos in certain measures with a few stands of double-basses.

In default of a string quartet with endless bows, the arrangement for string orchestra is definitely an improvement in the communication of Beethoven’s exalted thought. The slightest rasp in the change of a single bow, a momentary unevenness of the individual vibrato, or a wrongly stressed accent may dispel the mood so magnificently established and maintained in the score.

These risks are partly nullified in the larger arrangement. In the hands of a Toscanini, whose sense of classic line is exquisite, whose shaping of delicate nuance is a unique feat, these excerpts—particularly the slow movement—are almost reborn to our ears, assuming a pristine beauty. To the unpredictable drive of the scherzo, the basses give a touch of the diabolic that no amount of good ’cello playing from two hands can possibly achieve. But even granting the splendid playing of last night’s violins, massed strings take some of the glint and sparkle from the original scoring.

Those who are fond of esthetic speculation could dwell again on the mystery of the “Leonore” Overtures. Were they written in the order of the compositions known as Nos. 2, 3 and 1? Or are we to reject the teachings so arduously imbibed at the price of our conservatory diploma, and take the side of Ernest Newman and his disciples, who say that evidence both external and internal points to the astonishing fact that the “Leonores” were written in exactly the order in which they are numbered? Last night’s performance presented a strong case for the iconoclast. Is it possible that this lightly scored, almost hesitantly constructed overture could have been written after the gigantic Nos. 2 and 3? Florestan’s aria, so meagerly developed, seems to be proof that the answer is no.

But these, at any rate, are doubts that did not afflict last night’s audience, which was as well pleased with No. 1 as with No. 2, and with both as with the whole program.