It is easy to forget, since Toscanini lived so long and the bulk of his recordings came towards the end of his career, that he knew or corresponded with a vast number of composers, and that he went out of his way to program their compositions in his concerts. In his youth the music of Tchaikovsky, Brahms, and even Wagner was relatively new. He knew Verdi, Puccini and Mascagni personally and was happy to perform numerous works by both well-known and more obscure American composers [see PASC495 and PASC497]. His relationship with contemporary Russian composers was complicated. He was in personal touch with all three composers represented here, and they joined together in wishing Toscanini a happy 80th birthday in 1947. All of them would have been glad to receive the musical blessing, bestowed by his conducting their works, of the man widely considered to be the greatest living conductor. But while he was clearly willing to perform modern Russian works, he did not embrace them wholeheartedly.

Prokofiev composed his ‘Classical Symphony’ in 1916. Perhaps the more traditional form and tonality appealed to Toscanini, compared to Prokofiev’s later works, as it was the only composition of his that Toscanini ever conducted – three performances with the New York Philharmonic in 1929, and five with the NBCSO in 1939, 1944, 1946, 1947 and 1951. He also recorded the work commercially for RCA in 1951.

Toscanini conducted just two of Shostakovich’s symphonies, the 1 st and the 7th. Of those the 7th was performed only four times (the world premiere with the NBCSO followed by three further performances with the New York Philharmonic, all in 1942). Toscanini conducted the 1st symphony at least ten times with four different orchestras - the NY Philharmonic (1931), the Vienna Symphony Orchestra (1939), the BBC Symphony Orchestra (1937), the La Scala Orchestra (1946) and the NBCSO (1939 and 1944). Toscanini’s biographer, Harvey Sachs, describes him as ‘curious’ about Shostakovich’s music. However Toscanini also described Shostakovich as ‘all dissonances’ and that perhaps explains his unwillingness to conduct more popular works such as the 5th symphony.

Kabalevsky’s 2nd symphony was programmed twice by Toscanini, in 1942 and 1945, both with the NBCSO. This 1942 American premiere ‘made an excellent impression’ according to the New York Times, as authentically fresh work by a ‘sincere and accomplished Russian composer’. Kabalevsky’s Colas Breugnon Overture, composed in 1936, was performed on numerous occasions by Toscanini and the NBCSO, and a commercial recording was made for RCA in 1946. The 1943 broadcast presented here was the piece’s American premiere.

Cover artwork based on a photograph of Toscanini 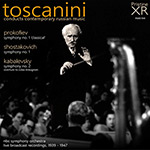 It’s odd to imagine Prokofiev’s “Classical” Symphony ever having been “contemporary” music, but it had just passed 30 years of age when Arturo Toscanini led the NBC Symphony Orchestra in the broadcast performance featured on Pristine Audio’s collection of three Russian symphonies of the 20th century. This very rapid rendition, lasting a little over 13 minutes, was taped on November 15, 1947, but it’s a mark of the virtuosic playing and Toscanini’s control of quick tempo that it rarely seems hurried; only the lightning-quick first movement has the feel of many bows and fingers straining to keep together. Pristine’s transfer of the broadcast sounds much fresher than that included in the Music & Arts set Toscanini Conducts Music From Russia (MACD1115).

According to the booklet notes, Toscanini felt little affinity for Shostakovich’s music—“all dissonances,” he’s quoted as complaining—and if we’re to accept the version of the long-distance musical relationship related in the disputed Shostakovich memoir, Testimony, the composer felt little love for the performances of his occasional interpreter. Toscanini lives on in the Shostakovich record books as the first conductor to perform the “Leningrad” Symphony in the United States, in 1942 (though not, as claimed in the present disc’s booklet note, the world premiere), but this rendition of the First Symphony was taped January 14, 1939. This is, then, one of the earliest performances of a Shostakovich symphony on disc, and it’s painted in primary colors, emerging very vividly and pretty forcefully through the pre-war recording. It’s very fast where you’d normally expect the music to be fairly fast; certainly, far more aggressively driven we than ever hear this music in performances today. Really, the first movement’s genial second subject is the only moment of space and light in a particularly vigorous reading, and if Testimony really is to be believed, I can imagine the composer finding it all pretty short of lightness and wit.

Kabalevsky’s Second Symphony of 1934 is the real rarity here, and Toscanini’s direct and intense approach, heard here in a broadcast from November 8, 1942, makes it a really enjoyable one. Kabalevsky does, admittedly, paint in the bright and uncomplicated colors of the propaganda poster, but he’s a composer of enough ability to do it convincingly. Where the Toscanini drive was just too much in the Shostakovich, it’s positively a virtue here, and the NBC Symphony’s cracking playing make the best possible case for Kabalevsky’s gloriously unsubtle melodrama. Kabalevsky’s more familiar Colas Breugnon Overture, taped on April 11, 1943, is the witty bonus at the disc’s end.

It all sounds brilliant in Andrew Rose’s transfers. The original spoken radio instructions have been retained, which is a quaint touch, and the booklet notes provide a brief but detailed guide (Leningrad-slip notwithstanding) to Toscanini’s work with the three featured composers.