The use of these new source discs translates directly into remarkable audio quality, with quiet backgrounds and a particularly wide frequency range - and sound quality that would have been considered excellent on a hi-fi era LP record from twenty or more years later. The use of the latest audio restoration technology brings with it rock-solid pitching, excellent tonal balance, and a clean, clear sound quality throughout. On the present volume I had to contend with both wow and flutter throughout the recording, and also two different pitches caused by the disc cutters running at different speeds. There was also a degree of pitch drift to be seen across sides. Cumulatively this resulted in differences of up to a semitone in pitch between the highest and lowest points of the recording, and a section of around four minutes where the pitch slowly rose by almost this amount. 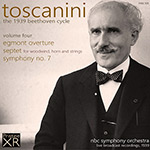 Perhaps those who listen to an instrumental concert by means of the radio get the greatest rewards from the scores which employ but a few instruments, as, for example, the Beethoven septet, which, with reinforced strings, was performed by the NBC Symphony Orchestra under Toscanini's direction last night in Studio H-8 in Radio City in the fourth concert in the Beethoven cycle. At least, this principle holds true if Toscanini directs the performance.

He is pre-eminent in music which requires the clarity, artistocratic grace and inherent power of the representative scores of the Haydn-Mozart and early Beethoven period. Much of the Septet might be Haydn, were it not for a new compression, energy and humor which entered music with Beethoven, It was a common mistake of even a quarter of a century ago to refer condescendingly to the early scores of the Bonn master, but Toscanini always knew better. He makes of each phrase a masterpiece.

Mr. Toscanini would probably agree with the Arabian philosopher who discovered in a small ring the reflection of the completeness of the universe. Here, in simple melodic lines and small dimensioned forms, are the profound formal ideas which underly the symphonies. The enchanting simplicity of the Septet, in a word, is matched by its consumate workmanship. To achieve a like simplicity and mastery in performance is an accomplishment of only secondary magnitude.

Mr. Toscanini accomplished this so felicitously that at times one wanted to laugh aloud in sheer exhilaration at his achievement. There were not only grace and wit, but also a pervasive beauty of song in the playing which provided the last essential of a great interpretation. Thirty strings replaced Beethoven’s four. These thirty proved that they could play, not like four, but like one.

The utter absence of bombast or mere dramatic rhetoric, and the quintessence of drama and heroism in the “Egmont” score were precisely reflected in the performance. The Beethoven Seventh Symphony had the same unsurpassable sincerity and complete absence of effect for effect’s sake, or for any reasons save those both implicit and explicit in the score.

It would be interesting, one of these days, if that rare being, the conductor who loves Beethoven but fears him as he does his God, should attempt a small editing to obtain somewhat better balances in the orchestration of the symphony's introduction, where the wind parts, with the noble swinging motive in half notes, are in certain measures not strong enough to balance properly the ascending sixteenths of the strings. That is Beethoven’s shortcoming.

Mr. Toscanini, as usual, takes the trio of the scherzo of the symphony faster than is customary. The more one hears this, the more it seems logical, and no injustice to the music. He made no attempt to read special things into the uproarious finale, built principally on the Nora McCruna song. He gave the music its head, and we were richly rewarded.

A profoundly moving and humbling experience

Some twelve years ago I reviewed a Music & Arts box featuring Arturo Toscanini’s celebrated 1939 cycle of Beethoven’s Symphonies – all bar the ‘Choral’ recorded at Studio 8H – and it has since released another version that is better in some ways and worse in others. I hoped that that doyen of historical transfer engineers, Andrew Rose, would lay his hands on some aptly pristine acetates and produce state-of-the-art re-mastering, which is exactly what has happened, plus the 1940 Carnegie Hall Missa solemnis. Apart from the sound, what makes the concerts different is that these are complete, including Overtures and orchestrated chamber pieces.
Toscanini’s readings bring together visceral power, rhythmic drive, effortless rubato, tempo and dynamic variation, humour and beautifully sculpted melodic lines to create a totally uncompromising, exalted vision of these supreme masterworks, which makes the entire period-instrument school sound hopelessly underpowered and sadly irrelevant. Crucially on these Pristine releases for the first time you understand why contemporaries talked of the richly upholstered, yet defined sound Toscanini drew from an orchestra, lustrous strings, exulting brass, and you realise that unusually for that era the timpanist’s savage assaults were made using pretty hard sticks. In the Ninth Symphony and Choral Fantasy (the latter incisively and wittily conducted, but scrappily played by Ania Dorfmann) the vocal soloists are there in front of you and the chorus is very life-like. Added to this there is exceptional clarity, so one can appreciate the masterly way in which Toscanini layers the sound, structures chords and builds climaxes. Indeed at the end of the Ninth I was moved to tears by the glorious, measured majesty of his conception.
As for the Missa solemnis, a stellar line-up of singers includes a twenty-eight-year-old Jussi Björling. In the opening ‘Kyrie’ one immediately notes at a measured tempo the way the imposing dead-weight chords contrast with the fluid vocal line Toscanini weaves. Beethoven was famous for not really giving a damn whether anybody could perform, let alone understand, the music he composed in his third period and the ferocious, tumultuous start to the ‘Gloria’ is fiendishly difficult to bring off. The way in which the composer illustrates the text with changes of pace, emphasis and emotional stress has defeated many a conductor, but Toscanini simply tears into the opening and, as in the Symphonies, always seems to find the right tempo that enables him to segue perfectly from section to section, so the colossal fugue carries enormous conviction, although the final chord is split. In the ‘Credo’ the opening tempo is restrained, the architecture massive, the move to Adagio effortlessly achieved, the soloists are beautifully led by Björling and the huge double fugue moves inexorably forward, with absolutely no sense of hurry, and a sense of dramatic timing that any aspiring Beethoven conductor would do well to study. And so it goes on... profound contemplation, precision of execution, exemplary dynamics, inexorable power ... and the work’s enigmatic ending makes perfect musical and emotional sense.

In terms of the sound, there were issues with occasional overloading and very prominent trumpets, but compared to three other versions I have of this performance this has far greater weight, definition and presence, far better reproduces the distinctive timbres of the soloists and the dark-hued sonorities of the chorus.

Pristine had access to excellent source materials – presumably mint acetates – and Andrew Rose is not afraid to use an array of modern software to further improve the sound heard on these fragile eighty-year-old lacquers. This includes Celemony Capstan (yours for around €3,500!) that removes excessive wow and flutter caused by variable cutting speeds and/or faults on the lacquer. In terms of noise reduction, things have moved on enormously from the early days of Cedar which removed excessive hiss and some snap, crackle and pop, but largely destroyed the upper frequencies and harmonics, whereas now the image is not deadened.

In 1939 and 1940 multi-channel stereo recording was unknown, so even at Carnegie Hall the engineers used just one microphone, which fed, by modern standards, decidedly low-fidelity cabling, amplification, lathes and cutting-heads, which could not capture low and high frequencies and struggled with clarity and definition. However over a decade ago a company produced a cheap application called Har Bal, which enabled anyone to select a piece of music of whatever length and import the frequency response of a modern recording, which as anyone who owns this will know, makes a huge difference to the internal balance because it liberates frequencies and thereby instruments, and Pristine uses this.

Then there is ambient imaging, which broadens the sound-stage without any loss of definition and again creates something closer to what the audiences would have heard. Related to this there is software which enables a remastering engineer to replace part of or the entire acoustic signature of a hall with that of another, where this has been measured. Clearly this is totally unnatural, so why would you use it, to which the answer is Studio 8H. This was built specifically to house the NBC Symphony Orchestra at full-strength; unfortunately the architect knew absolutely nothing about acoustics, as a result of which the sound produced and thereby recorded was unacceptably shallow, bass-light, treble-heavy and harsh, so Pristine adds a dash of Carnegie Hall to the mix, which is a huge improvement.

With regard to formats, 24-bit downloads were used, but you can get 16-bit, CD and – heaven forbid – MP3. What we have here is by some distance the greatest Beethoven Symphony cycle and account of the Missa solemnis ever recorded in sound that for the first time does justice to them and it has been a profoundly moving and humbling experience to once again listen to these supreme masterworks.