The use of these new source discs translates directly into remarkable audio quality, with quiet backgrounds and a particularly wide frequency range - and sound quality that would have been considered excellent on a hi-fi era LP record from twenty or more years later. The use of the latest audio restoration technology brings with it rock-solid pitching, excellent tonal balance, and a clean, clear sound quality throughout. On the present volume pitching was a particular issue, with severe wow and flutter to deal with as well as some considerable problems with pitch drift, manifested as a gradual drop over the course of each 10-15 minute side. This is all now fixable thanks to recent developments in digital restoration technologies, employed here possibly for the first time. 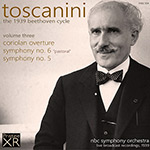 Mr. Toscanini led performances by the NBC Symphony Orchestra of Beethoven’s “Coriolanus” overture and Sixth and Fifth symphonies, in the order mentioned, last night in Radio City. It was the third concert of the current Beethoven cycle. The most polite and attentive audience in the world heard superlative readings of these masterpieces.

It may be said that these audiences, in addition to the achievements of Mr. Toscanini, experience a special pleasure. For they hear, as they could not hear anywhere else in the world, every note of Beethoven’s instrumentation.

This is due to the very acoustical limitations of the auditorium, which has so little vibration, and is deliberately deadened in sonority, so that the orchestral tone loses much of its brilliancy and the richness of the tone is dried up. The result is an almost microscopic clearness of detail, which could be the ruin of an inexpert performance.

But when Beethoven’s “Pastoral” is played with the beauty, clearness and meticulous finish of phrase that Mr. Toscanini bestows upon it there is a new realization of the beauty of the music and its craftsmanship, and the potent simplicity of the thought. For Mr. Toscanini, no more than Beethoven, hasn’t anything to conceal. Examine his performance with a magnifying glass for the score and an ear trumpet to magnify any tonal error at hand, and you will only marvel at the workmanship of composer, conductor and orchestra.

As for the thrilling performance of the Fifth symphony, it need only be said that it sounded exactly as Beethoven would have had it, and rang as true as steel throughout its gamut of heroic feeling. It is certainly the most dramatic symphony ever written. The audience was applauding wildly as the reviewers fled to their task.

This quartet of releases [Vols. 3-6] completes Pristine’s remarkable survey of the 1939 live Beethoven cycle broadcast by NBC radio, with the network’s eponymous orchestra led by Arturo Toscanini. Many of the general comments regarding the previous releases apply here. This moment in the conductor’s career marked his final phase as a public performer, and yet he would remain active for nearly another decade. Those years included the intervention of a terrible war, various personal travails, and the natural toll of age. Artistically, we can hear greater rhythmic flexibility in these performances in contrast to the post war recordings, an intensified sense of alertness and even spontaneity, and a somewhat brasher tonality. Some of these differences can be attributed to the fact that the ensemble was new in 1939 and so not as cohesive as it would become, and most importantly, that these are live performances, where a degree of artistic freedom (not to mention the occasional instrumental flub) will inform the performances, in contrast to studio recordings.

The quality that often came to mind as I sat mesmerized listening to these performances was joyousness. It is not a word that one naturally associates with the intense, serious-sounding recordings of the 1950s era, which is the Toscanini that the typical music lover knows best (due to the sheer volume of those productions, as well as RCA’s massive marketing campaign, which continued long after the conductor’s death in 1957). Even the cover photo, not coincidentally, I would guess, shows a smiling Toscanini, as opposed to the famously stark black and white images created by Robert Hupka for RCA.

That sense of joy lights up the fast, outer movements especially. It is hard to keep still in one’s seat during the first and fourth movements of the Symphony No. 7, not to mention the jubilant finale of the Fifth. Slow movements are beautifully paced and poetic, most notably in the Ninth. And speaking of the “Choral” Symphony, as magnificent as the 1952 RCA Carnegie Hall version is, this recording, as readers by now should surmise, is graced by just enough additional bounce and natural, supple pacing as to be preferable. The vocal quartet is superb, with one common singer between the two versions, tenor Jan Pierce, sounding somewhat more stentorian as a younger man. The females are terrific in both this 1939 version and in 1952, but Nicola Moscona is a far more commanding bass in the earlier performance. Another soloist of special interest is pianist Ania Dorfmann, in the Choral Fantasy, delivering tremendous vitality and drive.

RCA’s post-war recordings remain, justly so, among the crown jewels of the classical catalog. And yet this new set instantly challenges that hallmark, at least as far as Toscanini’s Beethoven is concerned. I have already stated my overall preference for the interpretive prowess of the 1939 series, but the icing on the cake is certainly the quality of the sound. Pristine founder and chief engineer, Andrew Rose, is definitely some kind of magician. Unlike the awful “enhancements” (pseudo-stereo, punched-up frequency profiles, etc.) that other producers have employed with older recordings over the years, these display a natural sense for the individual timbres of the instruments, with a decent amount of ambient space and remarkable dynamic presence. No hiss! No pops and clicks! Of course, these are 1939 originals, so there are some restrictions at the frequency extremes (high strings, for example, lack sparkle), but once the marvelous music-making kicks in, you don’t notice. The RCA recordings are comparatively fatiguing, with a distracting glare in the upper registers. I hasten to add that I have many Toscanini LPs, some reissues, but many original issues, so this is not a glib analysis.

One final note on the production; as is the case with all Pristine recordings, these releases are available directly from Pristine as high quality downloads. My auditions were via CD format. Any way you get them, these monumental recordings are must haves for music lovers of all stripes.