The use of these new source discs translates directly into remarkable audio quality, with quiet backgrounds and a particularly wide frequency range - and sound quality that would have been considered excellent on a hi-fi era LP record from twenty or more years later. The use of the latest audio restoration technology brings with it rock-solid pitching, excellent tonal balance, and a clean, clear sound quality throughout. Small details shine through, with exquisite tonal shading that may previously have been overlooked can now clearly audible - take a listen to our example above and the subtle shading of the trumpets for the chords at 2:17, for example. 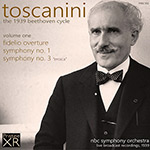 Mr. Toscanini conducted the first program of the "Beethoven Festival" of the NBC Symphony Orchestra last night in Radio City. He has seldom given a more impressive demonstration of his capacity to make very familiar music fall so freshly and significantly upon the senses and the mind that the hearer listens to something he has known from childhood with the emotion of unending discovery. We heard three staples of the symphonic repertory: the overture to "Fidelio"; the First symphony; the "Eroica" — these three, and one would say that within the dimensions of two minor works and one which is an ultimate of musical creation — the "Eroica" — he had traversed the immensities of art and the whole sublime trajectory of the spirit of Beethoven.

The smallest phrase, under such circumstances, communicates the sense of the entire work of which it is an integral part. Because it is ideally conveyed, in both its formal and emotional essence, it is hardly less in itself than the sum of all. And this holds true, whether the score be that of the less pretentious Beethoven, or the utterance of the matchless hero who produced the greatest symphony the world yet has known, the "Eroica." Everything in the concert was unforgettable. Everything, in a sense, was equal under the eyes of a man who is himself a hero of his art as well as a genius.

At the same time, the special relation of the “Fidelio" overture to the opera whose name it bears was made clear as seldom before. It was played for just what it is: essentially an eighteenth century overture, on the Italian model (though enlarged by Beethoven's quality) and very much influenced by Cherubini, who, however, wrote some greater overtures on these lines for his own operas. What Mr. Toscanini accomplished was his customary revelation of musicianship and infallible intuition. He held the overture precisely and with an almost magical fidelity to its style and its spiritual proportions.

In so doing he accomplished a hundred felicities of interpretation and technique. The crescendo soon after the opening was a case in point, The woodwinds were quick to emerge from slight imprecisions of attack which men on the qui yive at the beginning of a concert, however seasoned, may find it hard to avoid; and it may be said here the woodwind section of this orchestra has developed amazingly in sensitivity as well as precision under Mr. Toscanini's guidance. The performance, a delight to the ear and understanding, was an epitome of the workmanship of the piece and the influence which had gone to its making.

Monument to the Master

In the same way, on a grander plane, and of course with much more contrast and variety of manner, was interpreted the youthful and wonderful First symphony. Its beauty and concision constitute in themselves a monument to the master who thus approached the task of the Michelangelo of the Nine. It is to be suspected that this early Beethoven symphony has a special place in Mr. Toscanini's heart. Or was it merely that with the overture it took the proper amount of time, and no more, in a concert that was to unfold the immensities of the "Eroica"? At any rate, the performance of the First symphony was now transfired song, and now a piece of both homophonic and polyphonic writing as chiselled and aristocratic in its exposition as though we were hearing the finest chamber music.

All this was well conceived prelude, in Beethoven's lighter vein, to the tragic heights of the "Eroica." The symphony said so much partly because the interpreter was as sparing of pseudo-dramatics or ostentatious gesture as the creator of the symphony himself. It was properly titanic thinking and feeling. If one movement was more eloquent than the others it was the funeral march, which perhaps was inevitable in a performance that so completely matched the quality of the music. The pace of the march never sagged; only in two or three places was there the slight variations of tempo, the stress of phrase, which made that accent and fluctuation so much more moving than a succession of such effects would have been.

But it would be illogical to say that any one part of the "Eroica" transcends another part in importance: the structure is too perfectly and harmoniously planned for that to be. The first movement is the noblest kind of plastic. Then one reflects: perhaps it is the finale which is most immeasurable and mysterious like infinity. What is the strangest and most potent passage in symphonic music? Probably the curious reiterated B-flats, as fateful as the knocking on the gate in "Macbeth," that set off the theme. Then follow the variations which are as the play of stars and planets!

Mr. Toscanini drove all that home, so that one was abashed in the presence of Beethoven's brooding spirit, and aware of this fateful time in the world, and the immutable eternities. To all of which, thus carved and hewn from invisibility, the "Eroica" seemed the one and only answer.