By 1929, the thirty-one year old Jascha Horenstein had already amassed an impressive resumé of conductorial achievements, both on the podium and in the recording studio. After studying under Franz Schrecker, Joseph Marx and Adolf Busch among others, he had become a regular conductor of the Blüthner (later Berliner Symphonie) Orchestra, as well as an assistant to Wilhelm Furtwängler at the Berlin Philharmonic. It was upon Furtwängler’s recommendation that Horenstein had been appointed that year chief conductor of the Düsseldorf Opera.

In 1928, Horenstein made his first recordings for Grammophon/Polydor: a Bruckner Seventh (reissued on Pristine PASC 203) that was the première electrical recording of any Bruckner symphony, and Mahler’s song cycle, Kindertotenlieder, with baritone Heinrich Rehkemper. The following year, he made the recordings featured on the present program.

The repertoire is significant in the conductor’s discography, since he never returned to any of these works in the studio later in his career. The Schoenberg transcriptions were recorded at a time when the composer’s original works had scant representation on disc. (Indeed, as far as I have been able to research, there had only been two previous published recordings of Schoenberg works issued by this time.) The remainder were staples of the Austro-German repertoire, and included the first-ever recording of the Schubert Fifth.

Some aspects of the original recordings are worth noting. The Bach transcriptions were done in a larger hall than the remaining items, and have a more impressive sonority – at least until the very loudest passages at the end of the second track, which pushed the early microphones to their limits. Many of the sides run much longer than the usual four-and-a-half minute average. The longest – the second half of the Schubert Andante – runs nearly five minutes and forty seconds, so close to the label area that the matrix number was duplicated on the outer rim of the record. Finally, nearly all of the sides from the Haydn-Mozart-Schubert sessions have severe pitch drift, which has been corrected here.

These were to be the last recordings Horenstein would make until the LP era. The worldwide Depression cut back recording activity after 1929; and Hitler’s rise in the early ‘Thirties would force many, including Horenstein, out of Germany. The conductor settled in the USA and continued to guest conduct internationally after the war; but he would not make a commercial recording again until 1952, when he began a series for Vox (along with another “forgotten” prewar German conductor, Otto Klemperer).

The sources for the transfers were laminated Brunswicks pressed by American Columbia in the mid-1930s for the Bach and Haydn, and German Polydors for the remainder.

Special thanks to Richard A. Kaplan for providing source material 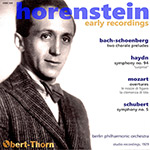 I am glad to welcome the happy Fifth of Schubert, which is as great a contrast as one could have to the Fifth of Beethoven. This was the light labour of under a month, in 1816, when the composer was nearly twenty. Earlier in the same year he had written the so-called Tragic symphony (well worth recording, too : though I should call it the Melodramatic, using the word in no bad sense). The later symphony is a charming epitome of Schubert’s liveliest mind in his first ten years of work. It is scored for a small band, not much more than the early “classical” orchestra; strings, one flute, two oboes, two bassoons and two horns. It was first played by, and probably written directly for, a band of friends who used to make music on Sunday afternoons at the Schuberts’ house. I came across the symphony many years ago, in piano duet form, and always hoped it would be recorded. The second movement takes two sides, the other three one each. The orchestra is notably full-toned. The five woodwinds play up splendidly, and quite balance the strings. I wish we could have had a better p level, as in the Trio of the Minuet movement, where some of the innocent country-children feeling is lost. The orchestra assures me, by various little signs, that it is a strong, flexible implement, getting high marks for the string tone (the record loses some of them : but I feel the silkiness beneath the electrical waves), and rather lower marks, though still a good total, for rhythmical delicacy. A little more could be done to keep the music subtly moving within the bar: the bars and phrases, however, build up well as wholes. Where will you find prettier, more care-free second subjects than those in the first and last movements, and where a finer contrasting Minuet? This one, I feel, has something of the Mozart G minor symphony’s third movement sternness—resolution, at any rate. The slow movement strokes the senses from the first note: this is pure Schubert, at his most tenderly discursive. There is a Mozartian flavour several times in the work—notably at the start; but mark how, as soon as the second subject of the first movement is enunciated, that modulation spots the composer, unfailingly, for any Schuhert-lover’s ear. I am impressed by the good big scale of the playing—not excessive scale, though it would be possible, I think to make it effective with softer playing, in parts; and in any case I wish we had more of that. The conception pleases me well, and in spite of the surface of these Polydors, which is not so good as that of our own companies, I recommend the records as music that you will want to put on again and again, for it is heartening: the kind of thing that the tired business man, if he has any taste at all, will find far more efficacious than deserts of dance music.

Mark Obert-Thorn re-masters the 1929 Polydor recordings by Jascha Horenstein (1898-1973), his electrical performances of music to which he did return later in his recording career. Some collectors will recognize this program as having had prior issue on the Koch Legacy label (5-7054-2) in inferior sound. What becomes significant in this program lies in the fact that circumstances—mostly political—would prevent Horenstein’s access to the recording studio until Vox Records signed this versatile conductor in 1952.

Each of the performances presents a driven, committed interpreter of the Great German Tradition, rather linear in conception and quite brightly lit in the interior vocal lines, especially in the Mozart selections. The Marriage of Figaro Overture suffers no “romantic” distortion in what proves a vigorous, brisk reading.  The more militant Titus score—also a favorite of Koussevitzky—enjoys a clean, liquid motion, favoring the woodwind articulation that assumes a chamber music sonority, set against the tutti response by the full ensemble. The layered polyphony benefits from the composer’s easy mastery of procedure. Much of the writing shares elements with the Overture to the Abduction from the Seraglio.

The Bach chorale transcriptions by Arnold Schoenberg—he BWV 654’s featuring cello solo work from Nikolai Graudan—virtually points the way the Leopold Stokowski treatment of this same repertory in orchestral terms. The low winds, brass, and harp colors converge in controlled dynamics while Graudan invokes a solemn prayer. The more festive BWV 631 resonates with a “Handelian” fervor, the orchestral sonorities’ easily invoking the positif—excepting the clashing of cymbals—of a grand organ.

The 1792 “Surprise” Symphony of Haydn maintains a subdued but respectable resonance, gently tipping in the opening Adagio cantabile; Vivace assai. This single-theme movement enjoys a sway and varied color line that moves efficiently and dramatically, without histrionics. The famous Andante—with its legendary sforzato, wakeup chord—contains a number of musical subtleties, including changes of key as the four variations proceed. Again, emotional restrain seems Horenstein’s order of the day, even as he crisply articulates the composer’s inventiveness. The mock-ponderous Menuet constitutes rather a German Dance in peasant style. The constrasting Trio section from Horenstein may prove too slow for some tastes.  The Allegro di molto finale give us one of the many combinations of sonata-rondo form Haydn perfected. Haydn exploits his capacity for thematic development, both within the structure and at the coda; but under Horenstein’s guidance, the music moves without sag or self-conscious seriousness.

Horenstein’s reading of Schubert’s 1816 Fifth Symphony represents its first appearance on record. The realization, crisp and light, captures the youthful exuberance and uncanny, lyrical beauty of the score, touched as it is in places—the extended Andante con moto especially—with emotional darkness and tragedy. The history of this music, too, seems to reflect the fate of the conductor: after just one performance, the score disappeared until rediscovered in 1867 by Sirs Arthur Sullivan and George Grove in Vienna. After 1929, Horenstein had to wait a quarter century before receiving an invitation to return to the recording studio. Happily, this particular Past became Prologue.