BRUCKNER Symphony No. 7 in E

There are two particularly remarkable things about this Bruckner Seventh. The first is that Grammophon/Polydor entrusted this première electrical recording of a complete Bruckner symphony to the 30-year-old Jascha Horenstein. At a time when that label was also making records with Furtwängler, Fried (who had made the first, acoustic, recording of the work several years earlier), Klemperer (who had previously recorded the Adagio of the Eighth acoustically), Pfitzner, Kleiber, and Richard Strauss, this was high praise, indeed, and a vote of confidence in the young maestro’s future career.

The second remarkable feature is the recorded sound that the original engineers were able to capture. Having transferred many orchestral discs from the late 1920s, I found it to be one of the finest-sounding recordings of its era. This is greatly aided by the quiet surfaces of the German Polydor pressings used for this transfer.

As the matrix numbers indicate, this was recorded over three separate sessions: the first movement in one session, the second movement and the first part of the Scherzo in the second, and the Scherzo’s Trio and the Finale in the third. Each session was recorded at a different speed, with the first two being well above the “standard” 78.26 rpm and the last being below it. The pitches have all been corrected here.

Like some other recordings of the 78 rpm period which featured A – B – A movements spread over three sides (the Scherzo in Mengelberg’s recording of the Schubert Ninth comes to mind), it was assumed that the listener would replay the first side of the Scherzo after the Trio side ended, since that side was not included twice in the set.

Bruckner Symphony No. 7 in E 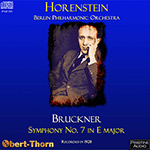