My original source material for these transfers was quarter-inch reel-to-reel tape, onto which transfers of the original recordings had previously been made by persons unknown. The 1954 recording was in generally good condition, though with dreadful tonal balance grossly amplifying the frequencies between about 1.2kHz and 9kHz, peaking at some 15dB above my reference recording at around 4.5kHz. With this corrected, the restoration was straightforward and the results fine, if slightly hissy.

The condition of the earlier recording, the Concerto for Orchestra, was not so good. Its frequency range was far more limited and the discs from which it had been transferred were in places quite badly damaged. I have spent many hours restoring (and in places, virtually rebuilding) the audio on this recording with, I believe, some success. However, there are limits to what is possible, and some mild unevenness in sound quality may be noticed at times. 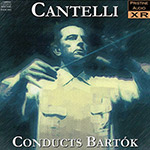 It’s the very reference model of the works in sound so close to real that it’s truly amazing. Simply essential.

In these days of slick CDs sounding as if they were recorded nowhere at all it takes a lot to get a cynical old beast like me excited. However this Pristine Audio Bartók release was thrilling from the first hearing.

Okay, Guido Cantelli (1920-1956) was so very special and his death in a plane crash in Paris robbed the world of a genius but he could be a bit wayward now and then. I cite his Britten ‘Sinfonia da Requiem’ which he excavates with his orchestral instincts but at the expense of what Britten actually wrote. It is in fact the only serious lapse I can recall. Damned exciting though and Britten agreed.

If you haven’t heard his Brahms, Schumann and Tchaikovsky you haven’t lived. Cantelli was the assoluto of the orchestra with a commanding ability to draw evident pleasure from musicians from many nations. His accuracy of tempo was greatly admired by men far older than he.

The Music for Strings, Percussion and Celesta (1937) is a very tough work to deliver successfully. Cantelli’s 1954 recording reminded me of the first time I heard Pierre Boulez do it as the new conductor of the BBCSO in his first Prom season in the Royal Albert Hall, London. Boulez eschews the baton and the stunning sound was as if his fingers were pulling invisible strings to all players; the enormous audience was silent. In all probability there was no greater silence than in this Cantelli live performance of 1954. That thrill of Boulez was brought back by this astonishing release. If anything, Cantelli is a nose ahead because Boulez never replicated that live thrill on record. We are fortunate that Cantelli was recorded live on 27 March 1954 . I wonder if the WGBH-FM Boston engineers on that night knew that they were broadcasting perfection. It seems likely that members of the Boston Symphony Orchestra knew that something special was happening.

What is special is that this complex work with dynamic extremes opens with the strings muted in violins and violas then goes to the rest of the strings at a measured pace; shades of Vaughan Williams 6th Epilogue of later years. The added strings, under masterly discipline, build up the keening dynamics to a climactic point. It is as if the entry of the timpani is required to return the strings to their wandering quest with a little goodbye from the celesta.

Cantelli takes the second movement Allegro at score pace with just a few valid Magyar syncopation strokes. He makes it fun after the rather pessimistic opening movement and there’s brilliant attention to pizzicato to set against the celesta interventions. It all makes sense with celebration coming like the resolution of a lovers’ spat.

The Adagio third movement is slightly quicker than Boulez and Solti on record but my “reference” favourite old EMI LP with Gyorgy Lehel conducting Hungarian musicians is just a fraction over Cantelli’s 6:12.

That touch of urgency after the slow opening of wood blocks and timps followed by lower strings is a masterstroke. Cantelli’s pace makes sense when the sliding string passage against celesta and pedal timp moves to resolution and development.  Most conductors miss the point that if Bartók had wanted a peak in the violas he would have written it. Here we find Cantelli getting the best of the lower strings and varied percussion (including piano) at a slower pace than even Lehel. The tensions of stretched harmonies flow out uniquely in my experience. Cantelli even keeps the stronger string dynamics without vibrato. The result is to weld this strange music to the musical agenda of the whole work if one listens hard.

The final movement, Allegro molto sounds as if a Magyar was conducting but the score is clear. The difference between Lehel and Cantelli is a cigarette paper except for phrasing points when the fun music needs to romp. Cantelli is maybe a bit less abandoned than Lehel but remarkable nonetheless.

The biggest danger with this work is that the movements can seem disparate. I feel that about the Solti (Decca), which is probably the most familiar. Boulez knits it well enough in his recordings but he was better live. Lehel’s authenticity is frankly outclassed by Cantelli’s depth of understanding of the actual music.

The Concerto for Orchestra (1943) is from Bartók’s very few American years when he left Hungary to avoid Nazi oppression. That period saw his last quartet - one of profound sadness - and a few interesting works. However for him there was no red carpet treatment and he was already in poor health with the leukaemia which caused his death in 1945.

Koussevitsky commissioned the Concerto for the Boston SO but the Cantelli version is with the NBCSO and was recorded for/from radio on 29 January 1949.

The invention of a true ‘concerto for orchestra’ in five movements was brilliant enough in itself. In it Bartók gave value aplenty by looking back to Europe and his beloved Hungary with unusually generous orchestration. Even so, there was more. Bartók never learnt English - even the American version - but was well aware of events during a terrible war. As well as retaining his sense of humour sufficient to satirise Shostakovich’s ‘Leningrad Symphony’ in the fourth movement he knew that his fellow composer was under a dictator just the same as his own country was by invasion.

To my mind Cantelli in 1949 captured the essence of the Concerto as a supreme musician better than Koussevitsky, Reiner, Solti and even modern conductors such as Rahbari on Naxos. That said it’s still difficult to say precisely how he did this; only listening makes the point. The faithfulness, discipline and genius of Cantelli is mercifully retained through this recording but just how Pristine Audio’s engineers dig out the actual sonics as they do is a mystery to me.

Cantelli’s analytical style with innate musicality makes sense of this as a concerto for an orchestra. Contrast this with a performance that communicates the work as ‘a piece for orchestra in five movements’ as it sometimes seems to be on disc. Cantelli spots exactly what Bartók intended in emphasis of orchestral sections. So did Reiner with the Chicago Symphony Orchestra for RCA. The sound is better in this Pristine Audio release of tapes taken down before stereo.

Now the gripes. Only one of them is to do with Cantelli’s performance. At the opening of the final movement there is a 12 note brass fanfare but Cantelli delays the last one for longer than the score shows; it sounds a bit odd – especially for Cantelli. If this is due to editing I trust that Pristine Audio’s genius engineer Andrew Rose will let us know. With the remainder of that movement simply so perfect I am probably being picky. However with the rest of this performance so perfect a ‘glitch’ like this stands out.

My other gripe is that the review copy I received was in a little wallet with front and back sheets usually to be found in a jewel case. There’s no insert and no information about the venues of the recordings. We can assume that the Boston Symphony Orchestra played in Boston Symphony Hall but I have no idea about where the NBC Symphony Orchestra was recorded. When a release is as important as this one the more information we have the better (Pristine offers recordings as downloads. This CDR was specially supplied for review so did not carry full documentation. Downloads are available from the Pristine website - Ed.).

Without reservation I recommend this issue. It’s the closest to analogue sound by a genius that you will hear. That said, a good outboard DAC is essential, avoid headphones and use very good speakers. Then you will hear Bartók in extremely important works as near to reality under a conductor of genius.

If you like Bartók’s music or are just getting to know it then you must have this CD. It’s the very reference model of the works in sound so close to real that it’s truly amazing. Simply essential.