This recording was made at the same sessions which brought Talich's marvellous reading of the 6th Symphony (PASC047), at London's Abbey Road studios in 1938, and is not only a particularly great performance, virtually all done in one take, but is one that Talich never had the opportunity to remake.

It has been noted that some non-Czech conductors can render the Symphony in a somewhat Brahmsian fashion; not Talich - this is purest Dvorak as delivered by a conductor who had known the composer and heard him conduct. This recording, surely, is the closest reflection we have to the music as heard and conceived by its composer, with the Czech Philharmonic on absolutely top form.

Written in 1884-5 for the Philharmonic Society of London, the Seventh Symphony, then numbered second in Dvorak's canon (and not renumbered until well after this recording was made), was premièred under the composer's baton in London on 22nd April, 1885, and soon became a popular favourite in England. Writing some seventy years later, the authors of 1955's The Record Guide note: "After No. 5 [the then numbering of the 'New World' Symphony], this is unquestionably Dvorak's finest symphony, and some musicians prefer it even to the 'New World'. It is swarthy music, with tragedy lurking in the background - and unusual mood for the happy-natured Dvorak; but the material, which is very fully and imaginatively worked, is deeply characteristic." 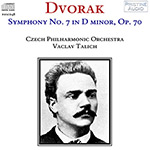