How many symphonies did Dvorak write? The simple answer is nine - but it would not seem to be so simple to the listening public at the time of this recording, which is clearly labelled "Symphony No. 1 in D major, Op. 60". Indeed for many years there were just five officially numbered symphonies, with the other four published posthumously (the manuscript of the first had been lost to the composer himself). Thus the composer referred himself to this as his first symphony; we've chosen for the sake of clarity to use the modern numbering system, which started to be used in the late 1950s. (There is much opportunity for confusion - the 'New World' Symphony has variously been numbered 5, 8 and 9!)

This symphony, rather less well known than it perhaps deserves, shows both the influence of Brahms' 2nd Symphony, particularly in the outer movements, though the central two are pure Dvorak, with a beautiful, stirring Adagio second movement, and the wonderful Scherzo, remeniscent of his Slavonic Dances. Indeed when the work was premiered, its enthusiastic reception led to the third movement being played again as an encore, and it's that movement which we've chosen to highlight here.

The recording here, made in Abbey Road in 1938, is one which has roots leading right back to the composer himself. Talich, whose name was synonymous with the Czech Philharmonic for nearly forty years, had both heard Dvorak play and met the composer as a young man. His handling of Dvorak's music, arguably that of the greatest Czech composer, is second to none, and the orchestra is superb, with all but two of the ten sides done in the first take. Wonderful music-making to savour! 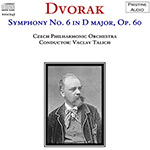 Talich conveys a pastoral, spiritual quality that is so appropriate for this symphony

When I was in my 20's (1950's), it was thought that Dvorak had composed only five symphonies and I was amazed that #1 (#6) was of such high quality. The symphony has one of the most entrancing openings in all music: as if the earth is taking a few breaths before the first theme arrives. And what a theme: so relaxed, so rustic, so redolent of forests and air and flowers. And then the theme tightens up and is given as a rhythmically powerful and full-throated fortissimo. The symphony is magnificent throughout with a fiery scherzo and a finale that presents a new and original mood and brings an emotionally satisfying end to the work. After I learned that five symphonies had preceded this work, its masterful craftmanship was explained.

I prefer the Czech Philharmonic and Czech conductors in this work. The Czech Philharmonic has such prominent and rustic-sounding woodwinds and woodwinds are very important to Dvorak's textures, often giving the first statements of the theme. I can resist the brilliance of the Berlin Philharmonic with Kubelik; they are a little too sophisticated and string-driven for this work. Czech conductors know how to let Dvorak breathe and impart a certain lilt and rubato that I think is essential.

I have compared the first movement of the Dvorak 6th in three performances, all with the Czech Philharmonic, all with Czech conductors:

The Neuman can be easily dispensed with. It is rather matter-of-fact, has a heavy bass emphasis and, because detail is not highlighted, seems slower than the other two. It is very difficult to choose between the Ancerl and the Talich. The Ancerl is very dynamic and forward moving with thrilling fortissimi and brass and tympany to the fore. Yet, he does let the phrases breathe and the woodwinds are clear and forward. A splendid performance. Yet, Talich has something different. The beginning is very moderate as if the earth is awakening. While the fortissimi are loud enough, they never seem to call attention to themselves. There is never a hurry. A crucial moment is the transition to the development where the strings linger in a mysterious passage. The true climax is saved for the coda where the brass blare urgently and then quiet down for the end.

I do not want to imply any great superiority of the Talich over the Ancerl, and in spite of Pristine Audio's very capable remastering, the Ancerl far outpoints the Talich in sound. But the Talich conveys a pastoral, spiritual quality that is so appropriate for this symphony and that is perhaps no no longer possible to create in the 21st century.