The Variations on an Original Theme, "Enigma" (Op. 36), written by Elgar in 1898 at the age of 41, finally brought their composer the recognition and acclaim which had up to then eluded him. Prior to this piece he'd been well-regarded provincially but had failed to make a real breakthrough nationally. But with the Enigma Variations we see the start of a string of major compositions and success for their composer, followed as they were by works such as 1900's The Dream of Gerontius (Op.38) (PACO009) and the Pomp and Circumstance Marches (Op.39), of which the first was written in 1902.

The Enigma at the heart of these variations is still unresolved - any number of solutions has been put forward for the origins of Elgar's theme. Ultimately the composer's little musical joke, it is secondary to the dedication "To my friends pictured within", in which Elgar describes the inspiration for each of the fourteen variations. You can read a full description of these inspirations here. Of the variations, it is the ninth, 'Nimrod', which is best known, and one of the most often performed excerpts in the concert repertoire.

As such the pairing here is apt - Elgar's Pomp and Circumstance March No. 1 contains, without a doubt, his best known tune - through the later addition of the words "Land of Hope and Glory" by Arthur Christopher Benson (1862-1925). The March was a huge concert hall hit, and though its two immediate successors failed to achieve the same popularity, with March No. 4, first performed at a Promenade Concert in London on 4th September, 1907, Elgar was to repeat the success of No. 1. 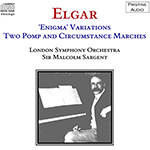