Rimsky-Korsakoff's piano concerto must surely be among the shortest to claim the title, particularly in the Romantic era. Yet it is full of delight and deserves to be better known. Written in the middle of his life, it seems to have had little impact on him - "I cannot clearly recall exactly when I first conceived the thought of setting to work on the Piano Concerto, nor when the concert was finally ready and orchestrated." (It dates from 1882-3.)

The music is based on a Russian theme, and can be considered a fantasy that has been divided into three tempi, corresponding to the three movements of the concerto. It is written after the style of Liszt, as the composer happily admits, and one may well hear echoes of Liszt's E flat Concerto in this piece.

Here we find one of the greatest pianists of the twentieth century, Paul Badura-Skoda, in one of his earliest LP recordings, made for Westminster in 1950 and then paired with Scriabin's concerto (PASC031). Despite some rather dubious original recorded sound, Peter Harrison at disk2disc has done wonders to make this once again worth hearing! 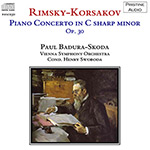