Frederick Delius (1862-1934), although a direct contemporary of Elgar in England, produced music which couldn't be more different. Throughout his life his chief influence was nature, whether in England, France (where he eventually settled), Florida or Norway. He had a huge talent for sensuous orchestration, and by the time of his death was regarded by many as perhaps the greatest composer of recent British history.

These four recordings highlight superbly his technique and ability and, superbly recorded by Decca, are handled with great expertise by conductor Anthony Collins, himself building a reputation at the time as a composer. They complement, too, our Delius Society Volume One recordings. 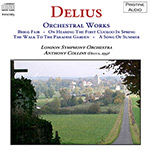