When Delius died in 1934 there was little of his music available on record - what could be heard was generally his most recent compositions with little sense of his full artistic personality. In November 1934, Columbia Records in the UK formed The Delius Society, with Sir Thomas Beecham as its Artistic Director, and shortly afterwards released the first of three volumes of recordings.

This first retrospective contained two major single-movement orchestral pieces, Paris and Eventyr, together with the closing scene from the opera Koanga, the Serenade from incidental music Delius wrote in 1920 for James Elroy Flecker's play "Hassan", and two short songs from the 1890s set to words by Shelley.

These excellent recordings could hardly be more contemporary to their composer, and Beecham had long been a powerful advocate of Delius' music. Here we present the Society recordings in precisely the order they were originally issued for perhaps the first time, in a newly remastered edition. 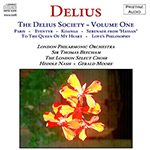