The recordings that survive on acetate discs of Adolf Busch and Rudolf Serkin performing at the Library of Congress hardly reflect the richness and variety of the recitals that the two musicians gave here from 1933 onwards. They performed there more than twenty times, quickly forming a close friendship with Gertrude Clarke Whittall, who donated five Stradivaris and Tourte bows to the library, to "be played by many different musicians."

Busch had met Serkin, then only a teenager, in 1920. Soon, they were performing in the leading European concert halls and making a series of now legendary recordings. Despite their difference of age, theirs was an understanding relationship of equals; Serkin was no mere accompanist but a true partner, and the pieces he and Busch excelled in reflected this democratic approach. Although the classics such as Bach, Mozart, Beethoven, Schubert and Brahms, some of which had already been recorded by His Master’s Voice in the 1930s, frequently featured in their programming, Busch and Serkin also brought to the library works less frequently heard, such as the music by Robert Schumann, Max Reger and Ildebrando Pizzetti. Their speciality, however, were the Beethoven Violin Sonatas, which were heard in their entirety twice, in 1937 and 1938 respectively, plus in several individual performances (see PACM 104).

The only work on this disc that Busch and Serkin had previously recorded in the HMV Studios in England was Brahms’s G major Sonata, Op. 78, a work that Busch had played in concert from the 1910s, in a total of more than 70 performances, with pianists such as Max Reger, Leonard Borwick, Elly Ney, Edwin Fischer, Artur Schnabel, and of course Rudolf Serkin. Compared with the 1931 studio recording, we have a less polished, but more lively rendering from the performers’ prime period, the concert situation adding audibly to the intensity of the performance.

A work that Busch and Serkin never recorded in the studio as it was unsuited to the short shellac disc sides, but frequently performed in concert, was Franz Schubert’s B minor Rondo brillant of 1826. Compared with the 1943 performance, also from the Library of Congress and released by Music & Arts, they take in 1948 a much more expansive, almost leisurely approach.

The concert on 7 October 1944 opened with a newly written arrangement of the American National Anthem for violin and piano written by Busch, which was only but infrequently performed and which has survived on record only once. The firmness of the tone, the interpretative conviction behind the tune testifies to Busch's and Serkin's clear position in their new homeland (both became American citizens in 1950, having emigrated from Switzerland in 1939).

Adolf Busch’s Violin Sonata in A minor was composed in 1941 and received its premiere performance on 10 December 1946 at the Library of Congress concerts. The work is not only Busch’s most mature composition for violin and piano, but also his most ambitious one, and never has a recorded performance of this work been so electrifying as the world premiere performance, bringing to light the best qualities of Busch’s composing and performing. The expressive intensity that both interpreters bring to the music gives it a depth that remains unbroken at every moment. The simplicity of the slow movement is comparable to Reger’s slow movements, but shadowed in the light of the time when it was composed (comparable only to that of Reger’s last Violin Sonata, the slow movement of which Busch performed in 1916 at Reger’s funeral service together with his brother Fritz).

BUSCH & SERKIN at the Library of Congress

All recordings made in the Coolidge Auditorium, Library of Congress, Washington (D.C.) 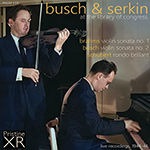