The meeting of 17-year-old Rudolf Serkin and 29-year-old Adolf Busch in Vienna in 1920 was a significant encounter for chamber music. Although at first Busch and his wife Frieda were virtually surrogate parents for Rudi, the two men soon became sonata partners and from 1929 played all their repertoire by heart. In the Beethoven cycle they have had no peers, and here are all the surviving Beethoven performances from their many recitals at the Library of Congress in Washington, DC.

Our first two sonatas come from the complete cycle which they gave at the Library in 1937 to mark the bicentenary of Antonio Stradivari’s death. The 500-seat Coolidge Auditorium, named after the ‘Lady Bountiful of chamber music’ (as W.W. Cobbett described Elizabeth Sprague Coolidge), was familiar from their 1933 visit; but since then another wealthy lady, Gertrude Clarke Whittall, had presented the Library with five Strads – a complete quartet and a soloist’s violin – and five Tourtes. Violinists and ensembles appearing at the Library were expected to use these instruments and bows; and as advertisements for the 1937 concerts stated that Busch would play one of the Whittall Strads, it is likely that on these occasions he did so (in future years a concession was covertly made for him: he played recitals with his own 1731 Strad and bow but carried the Library’s ‘Betts’ Strad and Tourte when acknowledging the applause). Mrs Whittall was very gracious to the Duo and made a little speech before their initial recital on 14 December. The D major Sonata, Op. 12, No. 1, was broadcast by NBC-Blue, as was the ‘Spring’ Sonata from the afternoon programme next day. These two performances were recorded off the air and the discs were lodged at the Library; but nothing from the third recital on the 17th – the eve of the anniversary of Stradivari’s death – was captured.

The ‘Little G major’ Sonata was the first recording the Duo made for HMV in Berlin in 1928, but it was not perfect and as Kreisler and Rachmaninoff made their famous version in America at virtually the same time, HMV had no incentive to spend more time on the interpretation many of us would have preferred! Fortunately several live Busch-Serkin performances survive, including these two. The central movement provoked one of the few disagreements between the Duo when they first rehearsed it – Busch stressing the molto moderato, Serkin the grazioso – but when they met again next day, they had miraculously moved towards each other’s position. No such problems bedevilled their interpretations of the last two sonatas and, although they made studio versions, it is good to hear these live accounts. In the ‘Kreutzer’, no other violinist has matched Busch’s Innigkeit at the opening, and no one has surpassed his devilish glee in the finale. The variations are masterly. In the ‘Great G major’, note how the Duo use the trills to propel the music forward in the Allegro moderato, and the easy lift they give to the second theme. Note also the breadth of phrasing in the second movement, the humour in the Scherzo and the rich characterisation of the final variations.

BUSCH and SERKIN play BEETHOVEN at the LIBRARY OF CONGRESS

Producer and Audio Restoration Engineer: Mark Obert-Thorn
Special thanks to Dr. Jürgen Schaarwächter and Tully Potter
Produced in co-operation with the Max-Reger-Institut/BuschBrothersArchive, Karlsruhe, Germany
Cover artwork based on a photograph of Adolf Busch and Rudolf Serkin (Tully Potter Collection)
All recordings made in the Coolidge Auditorium, Library of Congress, Washington, D.C. 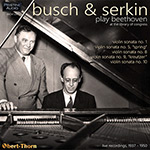