When the 88-year-old Leopold Stokowski conducted a work by Charles Ives with the London Symphony Orchestra in 1970, one critic referred to the maestro as "the man who has done more for contemporary music in America than all the rest of his generation put together." Indeed, The New York Times once estimated that Stokowski had given around 2,000 "first performances" (World Premieres, US Premieres, first broadcasts and so on) and we begin with one of them.

Alan Hovhaness, American-born of Armenian-Scottish descent, was a highly prolific composer who found in Stokowski his foremost presenter of several World Premieres. These included "Mysterious Mountain," especially written - in the composer's own words - for "a very great and wonderful man." For his part, in his 1957 appearance on the BBC Radio show "Desert Island Discs" (you'll find the programme on YouTube!) Stokowski singled Hovhaness out as a considerable talent among the younger composers of the time.

The "Exile" Symphony was premiered in England in 1939 by the BBC Symphony under Leslie Heward and was introduced to America by Stokowski in 1942. The music evokes the terrible sufferings of the Armenian people during the First World War. Years later, Hovhaness was to replace the middle movement, here entitled "Conflict," with a completely new one called "Grazioso." Stokowski's NBC premiere broadcast remains the only complete extant recording of the "Exile" Symphony as first conceived.

Although Stokowski was renowned for conducting numerous premieres, he was equally keen to perform new works introduced by others. He was already a staunch advocate of Stravinsky's music, having presented to America several of the composer's major works. These included "The Rite of Spring" in its concert and ballet presentations, as well as its first US recording. He also featured it, somewhat abridged and rearranged, in Walt Disney's "Fantasia," thus ensuring its continuing popularity in concerts and on records.

The Symphony in C was premiered in Chicago in 1940 by Stravinsky himself. He was to conduct it several times with other American orchestras before it was taken up by Stokowski, who said of the work: "It is remarkable for its simplicity and flowing cadence and has a certain 18th century flavour, with a wonderful expression of rhythm and counter-rhythm." The NBC radio premiere heard here was praised by Virgil Thomson for its "detailed clarity and overall comprehension."

Like so many other German musicians in the 1930s, Paul Hindemith fell foul of the Nazis and in 1940 had to settle in America. The Symphony in E flat was the first of his major works to be composed in the USA and was introduced by Mitropoulos and the Minneapolis Symphony in November the following year. The work consists of a vigorous first movement, a dirge-like second, a 'danse macabre' scherzo and a martial finale. Stokowski was sufficiently taken with the work to play it again with the Hollywood Bowl Symphony and the New York Philharmonic, doubtless revelling in its triumphant closing pages.

Despite their age, these wonderfully preserved acetate disc recordings reveal an astonishing level of detail and sound quality and a full frequency response. It's easy to forget, when hearing them, just how old they are - at the time of writing nearly 80 years has passed since these performances took place. Not all of their imperfections have been eradicable, but these minor surface noises pale into insignificance against the majesty of Stokowski's 1942/3 NBC orchestra and the sound quality captured here. Indeed these are some of the very finest quality recordings I've ever heard from this era. I would have liked to preserve the announcements from each of the performances, but to do so would have taken more space than is available on a single disc. In this instance therefore they have been cut and instead a short amount of applause left at the end of each work. 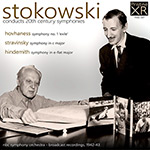