Joseph Szigeti was born in Budapest in 1892. After showing promise on the violin at a very young age, he was accepted as a student by Jenő Hubay and made his Berlin debut at thirteen. Shortly thereafter, he settled in England for several years. It was during this period that he met Ferruccio Busoni, who was to become a major influence in moving the young prodigy from being merely a talented virtuoso toward becoming a more intellectual and analytical musician.

A stay in a Swiss sanatorium in 1913 to treat his tuberculosis introduced Szigeti to a fellow Hungarian who was to become another major influence on him as a musician and a lifelong friend, Béla Bartók. Szigeti remained in Switzerland for several years, teaching and expanding his facility in playing chamber works. In 1925, he played for a visiting Leopold Stokowski, and was quickly invited to make his American debut. He shortly became established internationally as a concert artist. He settled in the USA in 1940, and continued his concert career for another twenty years before retiring to write and teach. He died in 1973.

Szigeti’s earliest recordings were made in England for the Gramophone and Typewriter Company between 1908 and 1913. He made no further discs during the acoustic era, save for a handful recorded in Russia in either 1924 or 1926. In the latter year, he began an association with English Columbia that lasted for eleven years, with one session for their Japanese affiliate in 1931 that produced four sides. In 1938, he began recording for American Columbia, where he remained until 1956, with one set (the Bloch Concerto) done for French Columbia in 1939, a single disc made for the American New Music Quarterly label in 1941, and a return to English Columbia for four sides in 1946. His final recordings were made for Mercury in 1959-61.

This series presents all of the Columbia recordings he made in Britain, France and Japan, as well as the one New Music Quarterly disc, as a complement to Sony’s recent set comprising his American Columbia recordings. From the 1940s onward, Szigeti began to experience increasing technical problems. American Columbia passed on releasing his 1955-56 recordings of Bach Sonatas and Partitas as well as several contemporaneous LPs’ worth of Mozart Sonatas, which were only issued later by Vanguard. Szigeti himself ruefully referred to his final Mercury LPs as his “posthumous recordings”. The performances featured in this series are generally judged to be his finest on disc.

The Berlioz which begins our program devoted to works of the Romantic era was one of two discs Szigeti recorded during his return to Britain after the war. It is the latest recording in this series. While Szigeti made three recordings of the Beethoven and Brahms concertos (one each for English Columbia, American Columbia and Mercury), he only made one of the Mendelssohn, the classic account with Beecham presented here. The additional version of the Adagio from the Brahms sonata was made as the filler to Szigeti’s recording of the Brahms concerto with Harty. He would do the same for his later remake with Ormandy, even after having recorded the sonata complete with Petri.

Szigeti re-recorded the Dvorak/Kreisler Slavonic Dance in E minor less than two years after his initial version, presumably to broaden the tempo. Both were released under the same catalog number in the UK with no take numbers shown, and the only way to tell them apart is by listening and comparing copies. Both takes are being reissued together here for the first time. This volume also includes two recordings of works by Szigeti’s teacher, Hubay, one of them from the violinist’s only Japanese session. The two Elgar works (in Szigeti’s own arrangements) were recorded as a tribute only four days after the composer’s death. 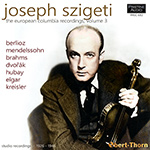