Excluding the vocal works, this collection represents Jascha Horenstein’s entire post-war output of commercial and some broadcast recordings of music by Haydn and Mozart. The first volume featured Haydn’s“Clock” and Mozart’s “Jupiter” symphonies, both restored from commercial recordings made originally for Vox Records. This, the second volume, continues that series with the “Prague” symphony but also includes live performances of two works Horenstein did not record commercially, Haydn’s “Military” and Mozart’s “Haffner”. Also preserved but still unpublished are several off-air and in-house recordings, including Haydn’s “La Reine” and “Clock” symphonies, and Mozart nos. 29, 31, 39 and 40, some of which will be included in future releases.

Horenstein’s approach to both Mozart and Haydn was anchored to its era but even during his time it aroused conflicting reactions. For some his “wholly unconventional” performances made him “one of the finest Mozart conductors of our time”, while his Haydn was often considered “beautiful and spiritually satisfying.” Others took a strongly contrary view, hearing performances that were dull, austere, unsmiling or pedantic with sluggish rhythms that lacked tension and drive. Although much opprobrium was directed at technical deficiencies in his recordings, contrary views of his interpretations in this repertoire accompanied him throughout his career.

Jumpy and sharp-edged, Haydn’s “Military” symphony, taken from a public concert in Paris in 1956, moves with lively tempos and strong forward motion. Horenstein’s view of the work is similar to Beecham’s in expressiveness but without the Englishman’s impish sophistication. He takes delight in the percussive clatter and fanfares of the "military" passages in II and IV, played exuberantly with all the mock pomp and gusto intended by the composer. There is nothing dainty or muted about this Haydn. Some subsidiary details are obscured by the limitations of the recording, taken from a radio broadcast. The master tapes are preserved in France’s Audiovisual Archive (INA).

According to Mozart himself, the first movement of his D-major “Haffner” symphony should be played “with fire”, an instruction abundantly evident throughout Horenstein's fleet-footed, sharply defined performance. The outer movements, spirited, assertive and energetic with crisply defined rhythms and harmonies recalling Mozart’s demonic side, are played with great fervour and enthusiasm, and no repeats, by a clearly attentive and energized Suisse Romande orchestra. The recording is taken from a radio broadcast of master tapes held in the archives of Radio Suisse Romande.

Mozart conducted by Horenstein is taut, serious and dramatic in the outer fast movements, lyrical, poetic and warm in the slow inner sections. As a general rule his Mozart can be characterized as strong, virile and anti-romantic. This is true for the “Prague” symphony, a studio recording made in Vienna for Vox Records during Mozart’s bicentenary year. The performance shows Horenstein to be a sympathetic Mozart interpreter. The carefully constructed outer movements exhibit lively rhythms that are never slack, while the Andante is delicate, songful and expressive with great depth of feeling. Some attributes that distinguish Horenstein’s style are inner energy and drive, forward motion, attention to detail within the phrase and a general sense of purpose and aim. 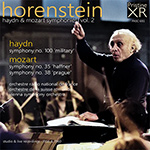