This release brings together five of Toscanini’s Brahms recordings with the NBC Symphony Orchestra outside of the symphonies and concertos which were officially sanctioned for release by RCA during the conductor’s lifetime. The recordings date from between 1948 and 1953 and were generally well-recorded for their day. Nevertheless I found that considerable improvements in sound quality were possible using Pristine’s Ambient Stereo XR remastering system, which brings with it a much fuller, warmer and realistic sound to the NBC orchestra.

I have presented the recordings in the order in which they were recorded, beginning with the Academic Festival Overture, the first of two recordings here that were broadcast from NBC’s Studio 8H in 1948 as part of a Brahms festival. This performance, the third of three given by Toscanini with the orchestra, was issued on LP by RCA and later on CD, and has not faired well with the critics – just possibly because, as Mortimer H. Frank points out, “RCA’s CD transfer of that performance remains as painfully shrill and unmusical as its previous LP issue.” Having heard that CD issue I can only agree – and note that this recording perhaps above all others has benefitted most from this XR remastering, demanding a full reappraisal of the performance from anyone who already knows it.

The rather little-known Gesang der Parzen (‘Song of the Fates’) for chorus and orchestra may well have been Toscanini’s only performance of the work – certainly it was his only US performance. Described by Frank as “one of the most imaginative strokes of programming” Toscanini made in his 1948 Brahms cycle – it was indeed a world première recording of the piece. Here the original RCA sound is better than the previous overture, but again has a tendence towards a hard sound that lacks warmth and resonance, both of which I’ve endeavoured to correct. The Robert Shaw Chorale is in fine voice!

The three remaining recordings were made in Carnegie Hall, New York. From 1952 a “studio” performance of the Haydn Variations was well recorded by RCA for LP release – here the XR remastering opens out the occasionally somewhat restricted sound of the original. It was a piece Toscanini conducted many times, with a pretty clear concept that remained largely unchanging over the years. Frank writes: “every one of Toscanini’s performances of this score has an expressive range, flair for drama, and prevailing unity unmatched in the surviving work of any of his peers. Clearly this was a Toscanini specialty.”

From 1953 we have a “studio” recording of four Hungarian Dances and a broadcast recording of the Tragic Overture, which rounds off this release. In its original release the Hungarian Dances sound particularly dry and quite harsh. It’s probably the least successful of the three Carnegie Hall recordings here in its original release form, though it has to be said that both 1953 recordings represented a step down sonically from the success of the previous year’s Haydn Variations . I’m delighted to say the Dances are transformed by XR here – performances which matched closely those he broadcast with the NBC orchestra of the only four he chose to conduct in the US – nos. 1, 17, 20 and 21. To these ears they are far more enjoyable to listen to now than previously!

Finally the Tragic Overture, his final performance of a work Toscanini first conducted during the composer’s lifetime, yet one which is unique in his approach after many previous outings. Says Frank: “Toscanini directed a reading in which the composer’s crabbed polyphony emerged in sharply focused texture, generating an austere tension. It is as if the conductor had completely rethought the work…” As with the previous recording, this new remastering brings out the rich sonority of the NBC orchestra that was somewhat lacking in the RCA issues, as well as recreating a real sense of the acoustic space of Carnegie Hall that was largely lost in the original broadcast.

Cover artwork based on a photograph of Toscanini 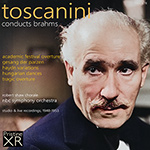