Excluding the vocal works, this three-volume collection represents Jascha Horenstein’s entire post-war output of commercial as well as one broadcast recording of music by Haydn and Mozart. These include Haydn symphonies 100 (“Military”), 101 (“The Clock”) and 104 (“London”), and Mozart symphonies 38 (“Prague”), 39 and 41 (“Jupiter”).

During the early part of his career Horenstein’s favoured symphonies by Haydn were no. 82, “The Bear”, and no. 86, characteristically adventurous choices for a period when the composer was better known by the later London symphonies. He also made an early and greatly admired recording of no. 94, “Surprise” (PASC 506), a work he appears never to have conducted on any other occasion. Haydn’s 101 and 104 first appeared in his schedule when he recorded them for Vox Records in 1957, and while the “Clock” symphony for a time was a regular item in his concerts, he never did the “London” symphony again. Later he added no. 100 and others to his repertoire but judging by the number of times he performed them, his favourites were no. 82 “The Bear” followed by no. 85 “La Reine”, though only the latter survives in an off-air recording and still awaits publication.

Although he conducted the four popular Mozart operas, the symphonies and other works on multiple occasions, sometimes with great success, Horenstein’s only commercial recordings of Mozart, again excluding the vocal works, are those he made for Vox Records in Vienna during the composer’s bicentenary year in 1956. It is unclear why the G-minor no. 40 was not included in this project. Also preserved but still unpublished are several off-air recordings of the Mozart symphonies taken from live broadcasts, including nos. 29, 31, 35, 39, and a fiery, agitated G-minor no. 40, by far his favourite of the canon judging by the number of times he conducted it.

Horenstein’s approach to both Haydn and Mozart was anchored to its era but even during his time it aroused conflicting reactions. His Haydn was often considered “beautiful and spiritually satisfying”, while others thought his “wholly unconventional” performances made him “one of the finest Mozart conductors of our time”. But some took a strongly contrary view. His tempi were considered problematic in repertoire from the Classical era, his performances were dull, austere, unsmiling or pedantic with sluggish rhythms that lacked tension and drive, or the playing criticized as sloppy, sleepy or laboured. “He can’t handle Mozart”, wrote a critic in Berlin. Both views accompanied him in this repertoire throughout his career.

Deliberate of pace, majestic and thoughtful, Horenstein’s recordings of the Haydn symphonies seem to bring Beethoven to mind. They are today considered large-scale performances although in music of this type he invariably used a reduced string section. This can be heard to great effect in the slow movement of the “Clock” symphony where the first flute rings out expressively over the violins, almost like a flute concerto. Horenstein’s forwardly placed woodwinds, reminiscent of Klemperer and with beneficial effect on colour, shading and tonal balance, can be heard to great advantage in all the recordings of this series.

Mozart conducted by Horenstein is taut, serious and dramatic, with brisk, lively rhythms in the outer fast movements, lyrical, poetic and warm in the slow inner sections. As a general rule his Mozart can be characterized as strong, virile and anti-romantic. Striking in the “Jupiter” is its lightness of touch, and the assertive energy and exuberance of the first movement; the long lines of sighing strings in the melancholy Andante; the dancing, peasant-like lilt in the Menuetto and the exceptional clarity of line and texture in the contrapuntal Finale. Some attributes that distinguish Horenstein’s style are inner energy and drive, forward motion, attention to detail within the phrase, grace and elegance and a general sense of purpose and aim. 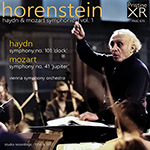