This release reissues for the first time since the 78 rpm era recordings by Julius Prüwer, one of only three conductors who had a direct link to Brahms and also recorded his music (the others being Weingartner and Max Fiedler). While some of Prüwer’s discs as an accompanist to singers and pianist Alexander Brailowsky have been previously reissued on LP and CD, this is the first release devoted to his purely orchestral recordings.

Prüwer was born in Vienna in 1874 and showed early promise as a pianist, attending a local conservatory from the age of 12 until he was 17. Hearing Hans Richter conduct changed his focus, and from the age of 18 onward he pursued a career as a conductor. After several years gaining experience in various posts, he settled in Breslau in 1895 where he spent the next 28 years, eventually becoming director of the opera company there. Along the way, he served as an assistant to Richter for several Bayreuth seasons at the turn of the century.

In the early 1920s, he went to Berlin to become a professor at the Hochschule für Musik, where among his pupils were Ferdinand Leitner, Franz Allers and Antonia Brico. In 1925, the Berlin Philharmonic appointed him to be the permanent conductor of their popular concert series. With the coming of the Nazi regime in 1933, he was removed from his post due to his Jewish heritage, eventually finding work as music director of the orchestra of the Jewish Cultural Association (Der jüdische Kulturbund). In 1939, he emigrated to America, where he settled in New York City, teaching at the New York College of Music, conducting the New York City Symphony Orchestra and performing as a pianist. He died in 1943.

During the late 1920s and early 1930s, Prüwer recorded prolifically for Grammophon/Polydor, setting down about 200 sides. Roughly half of these were vocal accompaniments, with the rest being orchestral recordings, including the first piano concertos of Chopin and Liszt with Brailowsky (reissued on Pristine PAKM 078 and 079, respectively). As with other conductors the label was recording at the time, including Wilhelm Furtwängler, Erich Kleiber and Otto Klemperer, the orchestral repertoire was largely limited to overtures and short works, with only an occasional foray into longer-form compositions. The Kristall recording of the Luigini ballet music presented here was his last, made a month before his dismissal from the BPO was announced.

It is difficult to generalize about Prüwer’s interpretive style. In more serious repertoire, such as the Egmont Overture and Schubert “Unfinished”, he takes a very deliberate approach, with his tempo for the development section of the first movement of the Schubert being particularly broad. By contrast, in opera overtures and short pieces, his performances could be highly energetic and colorful. (The Benvenuto Cellini Overture suggests that his Berlioz might have ranked in the exalted league of Munch and Harty.)

Various sources claim that Prüwer was a friend of Brahms and may have studied privately with him, so it is particularly apropos that all of his recordings of that composer are presented here. The Strauss is one of only two pre-war recordings to present Tales of the Vienna Woods complete with zither solo and repeats, during an era when some versions still truncated it to a single side. The music of Pancho Vladigerov was popular in Berlin in the late Twenties, and Prüwer’s committed performance of his Bulgarian Suite makes one wonder why this marvelous score has not been taken up by more conductors since.

The sources for the transfers were German Grammophon pressings, German and French Polydors, British Deccas, American Brunswicks and German Kristalls.

All Polydor recordings made in the Hochschule für Musik, Berlin 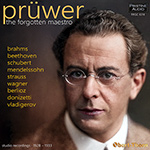