This volume is the first in a series which will reissue all of Sir Adrian Boult’s orchestral recordings with the BBC Symphony from the 1930s, many for the first time since their appearance on 78 rpm discs. While his concerto recordings with the ensemble during this period have remained sporadically available, his purely orchestral discs have seen only a handful of reissues over the years, focusing on a small amount of repertoire. The present release features the only recordings of the Bach suite and transcription, the Gluck and Mozart overtures, and the Beethoven Eighth Symphony that Boult made over his long career; and to the best of our knowledge, only the Beethoven and Schubert symphonies on this release have ever previously been reissued.

Adrian Boult had been the music director of the City of Birmingham Orchestra since 1924 when he was approached by the British Broadcasting Company regarding the creation of a permanent orchestra for broadcasts and concerts. Its first appearance in October, 1930 revolutionized the London music scene with a standard of playing far above what had hitherto been the norm, an achievement that was soon rivaled by Beecham’s creation of the London Philharmonic two years later. The BBC Symphony, which Boult led until he reached his mandatory retirement age in 1950, made its first recordings in May, 1932.

Boult’s Bach diverges from the slower, more monumental approach favored by Furtwängler and Stokowski in their Brandenburg Concerto recordings of only a few years earlier, and looks forward to a mid-century aesthetic, still using modern instruments and relatively large forces, but employing swifter tempi. (The tempo lurch when the “Vite” section of the Ouverture comes in may surprise, as does a similar transition in the Gluck Alceste Overture.) Boult’s tempo is fast enough to accommodate the famous “Air” on a single side, even with its repeat, but without feeling unduly rushed.

In the Mozart symphony as in the Beethoven, Boult achieves a more leisurely tempo in the Minuet by splitting the movement over two sides, with the break at the end of the Trio in both instances, in contrast with virtually every other version of the 78 era (Weingartner’s acoustic set of the Beethoven Eighth being a notable exception). The Mozart was probably recorded to replace the 1927 Albert Coates’ LSO version (on Pristine PASC 455) in the HMV/Victor catalog; even the filler Impresario Overture is the same. Boult rivals Beecham’s extrovert energy in the Jupiter’s finale, and even surpasses it in the rest of the work.

Boult greatly admired Toscanini (as can be heard in his radio interval talk during one of The Maestro’s postwar Philharmonia Brahms concerts on PASC 377), and his Beethoven is very much in the Toscanini manner – taut and forward-driven. His Eighth Symphony is one of the few of the 78 era to include the first movement repeat. This recording was one of the earliest with the BBC orchestra, and shows what a fine ensemble it was from the very beginning.

Boult’s interpretation of the Schubert Ninth has long been admired, and he would revisit it twice more on disc. As he did while recording the Bach suite, Boult set down the movements out of order in an attempt to have the ensemble at its freshest when doing the more demanding movements. Here, he recorded the finale of the Schubert first, before tackling the rest of the movements in order, and it makes for a thrilling conclusion.

The sources for the transfers were American Victor “Z” pressings except for the Gluck and Beethoven Coriolan Overture, which came from Victor “Gold” label pressings, and the Egmont Overture, which was not released in the States and came from a British HMV disc. The two Beethoven overtures have been separated from his Eighth Symphony by the Mozart Così Overture due to CD timing limitations.

Producer and Audio Restoration Engineer: Mark Obert-Thorn
Special thanks to Nathan Brown, Richard A. Kaplan and Charles Niss for providing source material
All recordings made at Abbey Road Studio No. 1, London 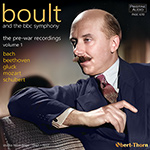