“A week from today, on Christmas night, the National Broadcasting Company will present its Christmas gift to America: maestro Arturo Toscanini conducting the NBC Symphony Orchestra for the first time. After an absence of nearly two years, Mr. Toscanini accepted an invitation of the National Broadcasting Company to return to this country for the express purpose of directing a series of weekly concerts to be presented by the NBC Symphony Orchestra. We have the added privilege of Mr. Toscanini’s presence with us tonight – he is sitting in the audience with friends…”

This announcement, heard midway through Artur Rodziński’s third broadcast concert, reminds the listener what this was all about: the preparation of an orchestra for Toscanini’s personal pleasure and use. Inspired by the BBC’s Symphony Orchestra – paid for out of the public licence fee – NBC’s decision to create a commercially-funded full symphony orchestra for radio must have been an enormously bold move financially. By the time Rodziński’s final pre-Toscanini concert took place, the radio network’s publicity machine was in full swing, hyping the new orchestra and its conductor in a way highly untypical in the world of classical music, with breathless articles published in magazines designed to attract a new audience from the educated and affluent readers of these publications. If this raised eyebrows at the time – and happily the hype did not extend to the broadcasts themselves – it was almost certainly seen as necessary in order to raise the advertising funding needed to maintain such a prodigiously expensive endeavour.

And so to the present broadcast. As has been noted in reviews of the previous two volumes, even at this early stage Artur Rodziński has a fine orchestra under his baton – one he has crafted (and recruited) himself, even if on the behalf of Toscanini, and one he makes full use of here. The sound quality is relatively good for its age – barring a short section of about a minute and a half during the Brahms where the source material was somewhat damaged. Once again I have had to trim announcements in order to fit the music onto a single CD – in this case cutting out some rather lengthy preambles.

“The more recordings led by Artur Rodzinski that I hear, the more apparent his skills become. It was Rodziński who recruited and trained the NBC Symphony Orchestra for Arturo Toscanini, and Rodziński led three of its concerts before Toscanini’s first appearance two weeks after this one, on Christmas Day, 1937. Pristine’s transfer includes Milton Cross’s announcements, which brings back fond memories for anyone who goes back far enough to NBC Radio and Metropolitan Opera broadcasts. We owe a continued debt of gratitude to Pristine for the high quality that goes into restoring such invaluable historical material. Simply put, this is a thrilling release.” – Fanfare Magazine on Volume 2

This was not the end of the road for Artur Rodziński and the NBC Symphony Orchestra. He would return from his full-time post at Cleveland later that season to direct three more broadcast concerts the following April, with a further four concerts taking place on concurrent Saturdays at the end of 1938.

RODZIŃSKI at the NBC Vol. 3


XR Remastered in Ambient Stereo by Andrew Rose
Cover artwork based on a photograph of Artur Rodziński and Arturo Toscanini
Broadcast of 18 December, 1937
Special thanks to Richard Rodzinski 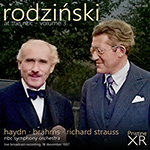