In celebration of the 150th anniversary of the birth of Willem Mengelberg (28 March 1871), Pristine continues its series of releases surveying the conductor’s recordings with the Concertgebouw Orchestra for Telefunken, the label for which he made the bulk of his commercial discs. They are being presented in roughly chronological order, with the present volume featuring recordings Mengelberg made in 1937/8. (The conductor’s Telefunken recordings with the Berlin Philharmonic have already been released on PASC 348.)

Our program begins with two versions of Vivaldi’s Concerto No. 8 in A minor from L’estro armonico and its “filler side”, the Air from Bach’s Orchestral Suite No. 3. Previously, it was thought that there was a single issued version of these recordings, which most discographies listed as having been made in December, 1938. However, a discovery I made during the production of this reissue revealed that, in fact, two completely different versions were recorded a year apart and issued under the same catalog numbers. The first one presented here was made in December, 1937. Before restoration, it had a prominent 50 Hz mains hum which was absent from the remake, heard directly following it.

According to the original Telefunken recording cards, the Vivaldi is played in an arrangement made by American violinist and conductor Sam Franko. While Mengelberg had previously recorded the Bach Air with the New York Philharmonic in an all-string setting by Mahler (on Pristine PASC 378), by 1937 this would not have been permitted for a German-based label, and another version with a harpsichord continuo (credited on some original 78 rpm editions as being by “Telico”, although I’ve found no evidence of a composer or arranger by that name) was substituted.

The Beethoven First Symphony was another work which Mengelberg had previously recorded in New York (PASC 412). In the earlier version, which took up eight sides, he included the repeats in the first and fourth movements (as he also did in his live 1940 Concertgebouw broadcast, on PASC 221). The remake cut it down to six by eliminating them. The Eighth Symphony, recorded the following day, was new to his discography (except for the second movement, which had previously been recorded as a filler side for Columbia), while the Schubert Rosamunde Overture had only figured among his recordings earlier in an acoustic version from New York in 1924, cut to fit one side.

Mengelberg had recorded only one complete Brahms Symphony earlier (the Third, for Columbia, now on PASC 616), so the Fourth was a major addition to his discography. He would go on to record the Second for Telefunken in 1940 (to be featured in the next volume of this series), but the First would only be preserved via a live radio performance from the same year (PASC 221).

As one of the greatest interpreters of the works of Richard Strauss (as well as a friend of the composer and the dedicatee of Ein Heldenleben), it’s puzzling that Mengelberg’s interpretations of his scores were not more frequently recorded. Besides two versions of Heldenleben (from New York and Amsterdam) and one of Death and Transfiguration, there was only this Don Juan to make up his complete Strauss discography. Our program concludes with Debussy’s Prelude to the Afternoon of a Faun, the only commercial recording of a work by that composer that Mengelberg made, although a broadcast performance of the Debussy Fantasy with Gieseking has survived.

The sources for the transfers were German and French Telefunken pressings from the original masters (no American Capitol-Telefunken dubbings), with a portion of the beginning of the final movement of the Beethoven First taken from a Czech Ultraphon edition.

All recordings made in the Grote Zaal, Concertgebouw, Amsterdam 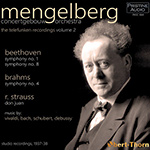