Guido Cantelli, it was widely assumed, would be the conductor to take on the mantle of Toscanini with the NBC Symphony Orchestra. The 82-year-old maestro had persuaded the 28-year-old Cantelli to follow him across the Atlantic from Milan to New York in late 1948, and thence to begin giving broadcasts with the orchestra in January 1949.

After the success of the opening concert of 15 January, Cantelli began work on his second programme, whilst writing daily letters to his wife, Iris, back in Italy:

“I must tell you about today’s rehearsal. In the first part I did Romeo and Juliet [Tchaikovsky] and here I really believed I had all eyes on me, even those of the Maestro behind my back. Then I went on to Paganiniana by Casella. At half-past-four I rested and went quickly to the Maestro to hear his impressions about the Tchaikovsky — ‘Good, very good.’ I swear to you, I don’t understand anything any more, because it seemed the opposite to me! Being the first time, I found myself in difficulty at certain moments: tomorrow, I will be more frank…”

Rehearsals continued, with Cantelli simultaneously finding himself in a whirlwind of social engagements – after hearing the young conductor would be dining with Bernstein, Toscanini exclaimed: “let all the conductors of America come, let them come and they will learn something!”

The concert took place without a hitch on 22 January 1949, Cantelli once again giving his immediate impressions in a letter to Iris:

“Here I am, back from the concert. I think everything went well — even the Tchaikovsky! I interpreted it a little in my own way, although in rehearsals, I tried to follow the suggestions of the Maestro. I’ll tell you about this when I return . . . Casella went well, but it could be done better, the lack of rehearsal time prevented me from going deep into it. After Tchaikovsky, the public gave me an ovation which was immense, but this was not enough for me because I was not able to be alone with the Maestro after the concert and don’t yet know his impression...”

The concert was preserved for the archives on discs transcribed during the broadcast, and I was able to work from a fine transfer of a set of these delicate records. There was slight evidence of wear during certain peaks, causing a little high end distortion, but overall the sound quality is fine. As with other broadcasts from the notoriously ‘dead’ acoustic of NBC’s Studio 8H a combination of XR remastering and Ambient Stereo processing has rendered it a far more pleasant listen than might be imagined possible to someone hearing the original discs.

CANTELLI at the NBC 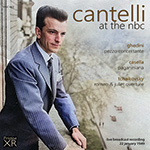