The music of Johannes Brahms and Antonín Dvořák was central to Adolf Busch’s repertoire from the start of his career. Studies with Brahms’s favourite conductor Fritz Steinbach and the Joachim pupils Willy Hess and Bram Eldering made it inevitable that he would be hailed as Joachim’s successor: he heard and met Joachim and spent a day with him in Berlin just before the great man’s death. The Brahms Concerto was his early calling-card and was played with almost every notable conductor of his time, including brother Fritz. His last public performance was a Brahms Concerto on 18 December 1951 in Basel – he retired two weeks later, with heart trouble.

This performance of the Brahms was given with the sympathetic William Steinberg (1899-1978) – they presented the work four times when Busch appeared as the Palestine Orchestra’s first soloist in 1937. His first-movement cadenza was published by Breitkopf und Härtel in 1933, just as he was beginning his courageous boycott of Hitler’s Third Reich. The tempo for the finale may come as a surprise. It was common knowledge among violinists of the ‘Joachim tendency’ that Brahms wanted a fast speed, but added a qualifying rider when Joachim found it impossible to play. Busch, along with Bronisław Huberman, preferred the composer’s first thoughts. Our encore is a further rendering of the finale, from Lionel Barrymore’s Concert Hall radio programme. Both versions feature extraordinary gipsy-like fiddling. (Incidentally, a recording of the 1951 Basel performance finds Busch no longer able to match such slashing virtuosity but still clocking in at 7:28).

Dvořák’s music was important to Busch. He first performed the Violin Concerto in 1906, with Fritz at the piano, and it launched his debút season as a professional, in Duisburg on 16 October 1910. The Busch brothers’ love of Dvořák had been sealed that very summer, Fritz’s second as Kapellmeister in Bad Pyrmont with Adolf as his concertmaster. Forced to grind out second-rate fare, especially pieces by the operetta composer Paul Lincke, Fritz confided in the chief director of Simrock, who was taking the waters, and a gift of orchestral scores by Dvořák ensued. When the clientele rebelled, the brothers started putting Lincke’s name on the programme but playing Dvořák. All went well until Lincke announced himself and complained about the deception. Fritz pacified him while Adolf made himself scarce, but the episode led to a lifelong enthusiasm for the Czech’s music. During his years in Vienna, Adolf Busch enjoyed Hausmusik with the General Secretary of the Gesellschaft der Musikfreunde, Dr Bedřich Dlabač, a talented amateur Czech fiddler who taught him much about the authentic interpretation of Dvořák’s rhythms. The Busch Trio and Busch Quartet programmed many of the chamber works and Busch recorded two Slavonic Dances, the Humoresque, a Romantic Piece, the Notturno and the E flat Quartet. This live recording of the Violin Concerto was made with the National Orchestral Association – which acted as a bridge between music colleges and professional orchestras – under their conductor for three decades, Léon Barzin (1900-99), a Belgian former violist and pupil of Ysaÿe.

XR Remastered by Andrew Rose
Cover artwork based on a photograph of Adolf Busch
Special thanks to Dr. Jürgen Schaarwächter and Tully Potter
Produced in co-operation with the Max-Reger-Institut/BuschBrothersArchive, Karlsruhe, Germany 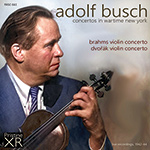