A Sea Symphony of Ralph Vaughan Williams was the composer’s first large-scale composition to receive a public performance and subsequent publication. (Two unpublished predecessors, also for vocal soloists, chorus, and orchestra, that have emerged from manuscripts only in recent years areThe Garden of Proserpine from 1897–99 and A Cambridge Mass from 1901, the latter submitted for the D.Mus. degree at Cambridge.) RVW began work on the score, originally envisioned as a cantata titled Ocean, in 1903 or 1904; in her biography of her husband, Ursula Vaughan Williams mentions that he was working on it during a 1904 vacation in Yorkshire. In 1906 he wrote to Gustav Holst that the scoring of the second movement was done, and the whole was completed in 1907, though revisions would be made right up to its premiere. Influences upon it include the cantata Invocation to Music of his revered teacher, C. H. H. Parry; Elgar’s The Dream of Gerontius; and Sea Drift of Frederick Delius. (During his studies with Ravel in 1907, RVW hunted down Delius in Paris and played the entire work for him, eliciting the laconic rejoinder, “Vraiment, il n’est pas mesquin”—Truly, it is not shabby.)

The premiere was given at the Leeds Music Festival on 12 October 1910, RVW’s 38th birthday, with the composer on the podium. The soloists were soprano Cicely Gleeson-White and baritone James Campbell McInness; the renowned dramatic soprano Agnes Nicholls (wife of Hamilton Harty), whom RVW originally had in mind in writing that solo part, would sing with McInness in subsequent performances elsewhere. Despite the now famous words of encouragement from timpanist C. A. Henderson—“Give us a square four-in-the-bar, and we’ll do the rest”—RVW was diffident as to how the initial performance went, even describing it in a 1941 letter as “a complete flop.” Aside from his own lack of sufficient experience as a conductor, it certainly could not have boosted his confidence when a nervous McInness said to him, “If I stop, you’ll go on, won’t you?” In fact, though, reviews were quite positive. Herbert Thompson of the Yorkshire Post perceptively observed, “The music is difficult, unnecessarily so, one would imagine, for probably the desired effect might have been obtained with less complication and fewer awkward passages, but however this may be, it strikes one as sincere, highly poetic in feeling, and showing the power to deal with a big canvas. The ideas are never puny or finicking, and the music has breadth and grandeur….” The critics for the London Times and Manchester Guardian were even more enthusiastic, without reservations. Thanks to championing by Hugh Percy Allen (1869–1946), who in 1918 both succeeded Parry as a professor of music at Oxford and became director of the Royal College of Music in London, the symphony had further performances at Oxford in 1911 (which RVW found far more satisfactory) and London in 1913. But it was a 19 June 1919 performance, directed by Allen for presentation of an honorary Oxford doctorate to the composer, that is often considered to have established the work in the standard repertoire in England.

The subsequent success of A Sea Symphony was also due in no small measure to the advocacy of Sir Adrian Boult (1889–1983). As an undergraduate at Oxford he came under the tutelage of Allen; he sang as a chorister in a performance of Toward the Unknown Region in 1909, attended the first two performances of A Sea Symphony, and was introduced to RVW in 1912. Boult conducted the symphony himself beginning in 1924, and assiduously promoted it thereafter; at a 1930 London performance, RVW’s first wife Adeline wrote to a friend, “Adrian Boult must be overworking, he is nothing but a black streak in a white waistcoat….” During his 20 years as director of music at the BBC, Boult used his position to promote the music of English composers, above all Elgar and Vaughan Williams. While the two men were not close personal friends, their relationship was more than cordial. To this day, Boult remains the unrivalled champion of RVW’s music on disc, with over 60 recordings of 36 different works that includes two complete cycles of the nine symphonies, with the present 1953 recording coming from the first cycle. Fittingly, on 20 February 1983, two days before his death, Boult asked his wife to play for him his second, stereo recording of A Sea Symphony; it was the last music he was to hear in this life. 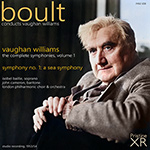