The collaboration of Fritz Busch with the orchestra of the Danish Statsradiofonien goes well back into the 1930s – in 1937 he was appointed Principal Conductor – and it is striking when in the concert review of 18 January 1951 the Nationaltidende at length reports: "Fritz Busch is back, and last night he bestowed the Thursday concert aga in with his distinctive imprint. How he is jumping around with the orchestra! He knows each and every one of the excellent musicians, and they know him and what each of his gestures means, from the very small movements to the big explosions - and the orchestra obeys his word." After the war, however, the good cooperation clouded over, not least because other conductors who had stayed in Europe had taken his place.

The present disc particularly focuses on music by Mozart, containing not just all the Mozart studio recordings that Busch made for the Swiss firm Turicaphon and for His Master’s Voice, but also a couple of surviving live performances, from as early as 1933 to 1935. Sadly neither the Mozart Piano Concerto (the only recorded rendering of Busch together with his nephew-in-law, Rudolf Serkin) nor the Bach E major Violin Concerto (the only recorded rendering of a Bach concerto performed by Fritz and his brother Adolf together) have survived complete; in addition to these fragments we have Dvořák‘s Karneval overture in Busch‘s 1933 rendering (another, 1950 live performance with the same orchestra, taped at the Edinburgh festival, has been published elsewhere). And it is apt to accompany this performance with the 1948 studio recording of Weber’s Freischütz Overture. Studio recordings of the orchestra with Busch for record companies were made only from 1947, beginning with Brahms’s Second Symphony (PASC 570) and ending in January 1951 with Haydn’s Sinfonia concertante (PASC 622) and, as a filler for the last shellac side, three Kontretänze by Mozart. Busch had recorded orchestral Deutsche Tänze and Kontretänze by Mozart from as early as c. 1920, and he may have particularly liked them as he saw in them freshness and invention combined even in the smallest miniature, may in them indeed have recalled his beginnings as a child playing dance music in the local pubs. The three Deutsche Tänze he had recorded in 1948, accompanying the ‘Kleine Nachtmusik’, were, like the Freischütz Overture, released only with much delay, Busch frequently having to ask the Zurich-based company Turicaphon for reference copies. Nor was he happy with His Master’s Voice, who by 1949 were running short of funds and paid Busch as little as possible. The 1949 ‘Linz’ Symphony is Busch’s second studio recording of the work, the other one having been made with the B.B.C. Symphony Orchestra in London in 1934.

For a considerable period Busch had made Denmark his home, and even after he had to flee from Europe in 1940 he kept in constant contact with the orchestra. He did not claim all of his scores and performing materials, which remained safe and secure in the Copenhagen Statsradiofoniens archives until after his death.

XR Remastered by Andrew Rose
Cover artwork based on a photograph of Fritz Busch taken in 1951
Special thanks to Dr. Jürgen Schaarwächter
Produced in co-operation with the Max-Reger-lnstitut/BuschBrothersArchive, Karlsruhe, Germany 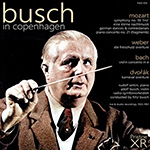