This first volume in a series which will present the complete recordings of Eugene Goossens and the Cincinnati Symphony Orchestra focuses on Twentieth Century British music, including some rarely-heard editions of scores that were later replaced by revised versions. Among these is the 1920 version of Vaughan Williams’ London Symphony , in celebration of the 150th anniversary of the composer’s 1872 birth.

Goossens was born into a musical family in London in 1893. His Belgian grandfather had been a conductor; his father, a violinist; his mother, an opera singer; and his siblings all noted instrumentalists (oboist Léon, harpists Sidonie and Marie and hornist Adolphe). After studying violin and playing in various London orchestras and chamber ensembles, Goossens became an assistant to Beecham in 1916. By 1921, he had taken up conducting full-time, forming his own orchestra, and making a particular specialty of new music. In the same year, he gave the British concert première of Stravinsky’s The Rite of Spring.

At the invitation of George Eastman, Goossens served as music director of the Rochester Philharmonic and taught at the Eastman School of Music from 1923 to 1931, splitting his time between the USA and Britain, where he continued to conduct in the concert hall and at Covent Garden. He led the Hollywood Bowl Orchestra frequently during his years in America, and made recordings there in 1928. From 1931 through 1946, he headed the Cincinnati Symphony before moving to Australia to conduct the Sydney Symphony (1947-56) and lead the New South Wales State Conservatorium of Music, where among his students were Joan Sutherland and Richard Bonynge. He was knighted in 1955; but his career suffered from a scandal the following year which caused his return to the UK. He died in 1962.

The Cincinnati Symphony had already enjoyed an illustrious history before Goossens’ arrival. Its previous music directors had included Leopold Stokowski (1909-12), violinist-turned-conductor Eugene Ysaÿe (1918-22) and Fritz Reiner (1922-31). Although the ensemble had recorded acoustically under Ernst Kunwald and Ysaÿe in 1917-19, they had not made any discs in over two decades until the February, 1941 sessions that produced the Walton and Vaughan Williams works presented here.

Vaughan Williams’s A London Symphony, had been premièred in 1914; but after the Great War, the composer cut it by about a third for a version published in 1920. Further cuts were made for a final 1936 edition that has been the standard performed ever since. However, the 1920 parts were still being circulated in America when Goossens made his recording, and that is what is heard here. Among several passages missing from the later version are about two minutes of music toward the beginning of the Epilogue. Other than the two acoustic sets of the score made by Sir Dan Godfrey (one severely truncated, the other with a large cut in the last movement), it is, to my knowledge, the only complete recording of the 1920 version (and even here, a repeat in the Scherzo is omitted in order to fit it on a single side).

The Walton concerto was premièred by Heifetz with Rodziński and the Cleveland Orchestra in December, 1939; but since the conductor and ensemble were under contract to Columbia and Heifetz was with Victor, the first recording had to wait a little over a year until the violinist performed it with Goossens in Cincinnati. The original version heard here differs from the one performed today (which Heifetz re-recorded under the composer’s direction in 1950) primarily in the use of percussion, where the increased presence of the xylophone, cymbals and side drum lend a greater brilliance to the final two movements.

“The Walk to the Paradise Garden” is perhaps the most well-known excerpt from Delius’ 1907 opera, A Village Romeo and Juliet. It is heard here in Sir Thomas Beecham’s arrangement, made, according to the publisher, “in order to bring the original work for large orchestra within the scope of a smaller orchestra.” While the Cincinnati Symphony probably had enough personnel for the original version, perhaps Goossens used the arrangement in homage to his former mentor. As the Walton was from Goossens’ first recording session in Cincinnati, the Delius was from his last, bringing our program full circle. 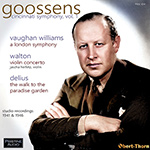