For this fifth and penultimate volume in our series of Fabien Sevitzky’s complete recordings with the Indianapolis Symphony, we present all the repertoire by Haydn and Grieg the conductor set down on disc with this ensemble.

Haydn’s opera, L’isola disabitata (The Uninhabited Island) was long known only by its overture, as the complete opera did not see print until 1976. Sevitzky’s performance emphasizes the extremes of uneasy repose and violent agitation in the music, in an intense performance that calls to mind the final movement of “Winter” in Vivaldi’s Four Seasons.

Haydn had previously used the final movement of his Symphony No. 73 as the overture to his opera, La fedeltà premiata (Fidelity Rewarded). This in turn utilized a hunting theme that had figured in earlier works by other composers, and thus the symphony gained the appellation “La chasse” (the hunt). Sevitzky brings an energy and momentum to his reading that belies the big orchestra approach of the time.

Like the better-known Peer Gynt, Grieg’s Sigurd Jorsalfar was written as incidental music to accompany a play, this one by Bjørnson concerning King Sigurd I of Norway. Of the nine numbers he wrote, Grieg chose three to organize into a concert suite. Sevitzky’s recording on a single disc pairs only the first two excerpts, with the last (the “Homage March”) left unrecorded.

The second suite of music Grieg had written to accompany Ibsen’s Peer Gynt is the lesser-performed of the two the composer arranged, even though it contains the lovely and popular “Solvejg’s Song”. When this was recorded in the 1940s, the Victor label sometimes divided works which would seem to go together naturally between two orchestras and conductors. For example, Ormandy and the Philadelphia got to record Enescu’s Romanian Rhapsody No. 1 while Hans Kindler and the National Symphony did the honors for No. 2. Similarly, Eugene Goossens and the Cincinnati Symphony set down on disc the first Peer Gynt suite, with Sevitzky allotted the second. Sevitzky makes the most of the varied moods of the four movements, aided by what was superb engineering for its day, with the “Arabian Dance” a particular standout.

Recording activities largely halted during the Petrillo Ban (a musician’s union action) from 1942 through 1944. When sessions resumed, Victor began recording with a noticeable amount of compression, giving the sense (to paraphrase critic Rob Cowan’s description) of a sound so massive the grooves could scarcely contain it. While this approach gives a great deal of presence to Grieg’s four Symphonic Dances, it also makes the sound a bit unrealistic, as well as relentlessly aggressive. Still, Sevitzky’s winning way with colorful, dance-based compositions carries the day in these works inspired by Ludvig Mathias Lindeman’s collections of Norwegian folk tunes.

The sources for these transfers were wartime 78 rpm shellac discs forSigurd Jorsalfar and Peer Gynt; postwar shellacs for L’isola disabitata and the Symphonic Dances; and 45 rpm vinyls dubbed from Victor lacquer backup masters for the Haydn 73rd. None of the works have ever seen an “official” CD reissue, and the Haydn overture and Sigurd Jorsalfar excerpts have not even previously appeared on LP.

SEVITZKY and the Indianapolis Symphony, Volume 5 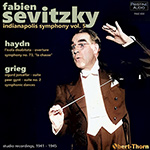