This publication brings together two composers close to Jascha Horenstein’s heart. His first known performance of Mahler’s Ninth Symphony took place during a tour of Soviet Russia in April 1932. The tour took him to Moscow for the local premiere of Mahler’s Fifth, and to Leningrad where he conducted the Ninth for the first time. The concert in Moscow was attended by Shostakovich and his friend Ivan Sollertinsky, Mahler’s first Russian biographer, both of whom later joined Horenstein on the overnight train to Leningrad for the Ninth. “I spent several hours in the dining car together with Shostakovich and Sollertinsky discussing Mahler”, Horenstein told an interviewer, “they attended my rehearsals and the concert of Mahler Nine with the Leningrad Philharmonic.” According to Horenstein, by 1932 Shostakovich was already a devoted Mahlerian, an influence that later became most evident in his Fifth Symphony of 1937 “which would not have been possible without Mahler”, and an allegiance for which Horenstein took some credit. “There is no doubt”, he said referring to his and Oskar Fried’s championship of the cause in Russia, “that we influenced Shostakovich through our performances of Mahler”, a declaration that adds extra interest to the selection of items presented on this disc.

There are several “firsts” associated with the present recordings from April 1952. They were Horenstein’s first since 1929 and his first for Vox Records, the label that so distinguished his career. It was also his first post-war engagement with the Vienna Symphony, the orchestra with which he had made his professional debut in 1922 but had not conducted since 1928, a life-changing generation away. Also a first as far as is known, the publication of Mahler’s Ninth was the first studio recording of the work to be released commercially, and with almost no serious competition for several years served as the entry point to the symphony, and to the composer, for many of the post-war baby-boomer generation.

Horenstein’s broad, romantic view of the Ninth Symphony, a magisterial and intensely emotional interpretation of the old-school type, is a synthesis of expressive force and intellectual grasp. “One of the major recorded Mahler Ninths”, opined the reviewer in The Gramophone some forty years after its first release, “a devastating, visionary statement, epic yet intimate, that incorporates a deeply troubled first movement, a rustic Ländler, a grimly emphatic Rondo Burleske and a finale whose heartbreaking fallibility not only transcends second-rate string playing but actually seems nourished by it.” For another reviewer, in a comment that can be taken as representative of a widely held opinion, the performance was “a text-book example of how to conduct this symphony.” The recording, despite its unsophisticated mono sound and some uncertain playing from an orchestra still unfamiliar with Mahler’s idiom, has remained proudly and continuously in the catalogues ever since its first release almost 70 years ago.

The same cannot be said of Shostakovich’s Fifth, recorded immediately following the Mahler and only the second recording of that work to be released commercially, which has largely disappeared from view, superseded in public esteem by better played, better recorded and more extrovert readings. The original Vox recording suffers from some of the same dry, spotlit sonics and other technical defects as the Mahler, especially noticeable in the muffled, sometimes inaudible sounds of the crucial timpani and bass drum parts. These problems have been addressed and partially resolved by the present restoration and do not seriously disturb appreciation of a wonderful lucidity of line in the first movement, a perfectly paced Scherzo, an intensely moving slow movement and an energetic but never hysterical finale.

XR Remastered by  Andrew Rose
Cover artwork based on a photograph of Jascha Horenstein taken in 1956
Special thanks to Misha Horenstein for his notes, assistance and access to the Horenstein musical archives from which this release derives
Recorded at Symphonia Studio, Vienna 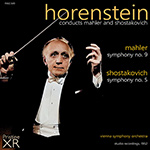