"Pablo Casals is probably the most astonishing figure of any musician of our day, all the more astonishing because everything he achieves is so simple and is always naturally right; and it may be because he has the most sensitive ear possible, and he uses it all the time. But, of course, his also very passionate nature, which he has entirely under control, is probably, with his upbringing, the cause of his greatness. He is a most typical Catalan, which must not be confused with Spaniards proper - they are as different as the Celts are from the Anglo-Saxons - and you must know that the education there is all in the hands of the monks, who give their pupils a complete training in Gregorian Music, which is a wonderful foundation to any musical training. As a matter of fact, Casals wrote a number of choral works in his youth, and a cycle, called The Twelve Months, which I heard two summers ago when I was spending my holiday at Vendrell (Casals' native town near Tarragona), and which contains some lovely music. He wanted to be a composer, and although he studied the violin first he was attracted towards the 'cello only because, when he saw one for the first time at his father's house, he thought the shape of it was so fine! He does not spend much time on practising the 'cello, but he learns everything mentally from the score. Conducting is really what he enjoys most, and, apart from his work, what he likes best is to be at San Salvador by the sea smoking his pipe after lunch at the little casino (only a cafe), where he plays games of trezilio (a most complicated card game) with his friends during the holidays.

I had the pleasure of spending a wonderful day there two years ago on the occasion of a fete that was given to Casals by the "Commune," to which he had presented a piece of ground on the sea front to be used for the national dance - the Sardana. Casals was at the height of happiness, all the people there gathered on the new "Place Publique," where the Cobla of Barcelona had assembled and was going to play the ritual music - for Catalans the Sardana is almost a religious rite - it is the most reverential form of dancing I have watched; men dance it together with very serious expressions; women join in the happy circle as the dance goes on, and the whole effect is most impressive. As an expression of rhythm it is also unequalled.

This little snapshot I took just before the dance began shows Casals with his two nieces-his violinist brother Enrique's children. Casals, who thinks also a great deal of sport, has built a tennis court next to his villa, and as it is the only one for miles around, he allows anybody who likes to come and play on it. He himself used to play a very good game although he had so little training, but his head work was so strong that he always managed to score. As he wrote on [a] photograph of the Trio taken years ago with the Hungarian composer, Em. Moor, "C'est moi qui gagne " - which is Casals' real motto."

(André Louis Mangeot (25 August 1883 – 11 September 1970) was a French-born violinist and impresario. He founded the International String Quartet in 1919, to which he invited the young John Barbirolli to become its cellist. This specialised in modern works, especially by young British composers. They made the first recording of Maurice Ravel’s String Quartet in 1927 and collaborated in the first (broadcast) performance of Benjamin Britten’s Phantasy Quartet in 1933. Later he formed the André Mangeot Quartet in 1947.) 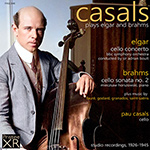