Joseph Keilberth (1908–1968) was a conductor who did not essentially strive for international fame. He was born in Karlsruhe and started his career in 1925 as repetiteur at the Badisches Staatstheater, soon taking over conducting duties as assistant to Josef Krips. In 1935 he succeeded in being appointed the first general music director of the Badische Staatskapelle (one of the other candidates for the position being Herbert von Karajan), remaining with the orchestra until 1940. From 1939 Keilberth took over some conducting duties with the Leipziger Sinfonie-Orchester, the orchestra of the Leipzig state radio station (Reichssender Leipzig). In 1940 he became, on the suggestion of Wilhelm Furtwängler, the general music director of the Deutsches Philharmonisches Orchester in Prague, an orchestra that had already existed during the Austrian-Hungarian Empire and that was retained during the Nazi occupation in the Protectorate of Bohemia and Moravia. Keilberth conducted the orchestra on 400 occasions, and he succeeded in obtaining full performing permission well through the war, so that the orchestra survived undamaged without loss of staff. Likewise was Keilberth exempted from military service, though being listed in Adolf Hitler’s so-called “Gottbegnadeten-Liste” of system-relevant artists resulted in him being interned in 1945, albeit only for a short period. As early as 1945 he became chief conductor of the Sächsische Staatskapelle, Dresden, reviving the musical life of the city until 1949. From 1948 to 1951 he was additionally first conductor of the Berlin Staatskapelle and in 1950 became chief conductor of the Bamberger Symphoniker, an orchestra which had been founded in 1946 largely by members of the then disbanded Deutsches Philharmonisches Orchester Prag. Simultaneously with the Bamberg post he was, from 1951 to 1959, chief conductor of the Philharmonisches Staatsorchester Hamburg, and a regular conductor at the Bayreuth Festival, from 1952 to 1956 (his outstanding live recordings of Der fliegende Holländer and Der Ring des Nibelungen, released on Testament, document this aspect of his activities). In 1959 he became Ferenc Fricsay’s successor as general music director of the Bayerische Staatsoper, Munich, retaining the Bamberg post until his death. An iconic Richard Strauss conductor, Arabella and Die Frau ohne Schatten are the most celebrated of his many operatic recordings of the composer; but also broadcasts of works as diverse as say Rossini’s The Barber of Seville or Tchaikovsky’s Eugene Onegin (both in German, with Fritz Wunderlich, Hermann Prey and Hans Hotter) are good examples of his conducting. His Freischütz recording with the Berlin Philharmonic Orchestra (an orchestra he had conducted from 1936) and the Cologne radio production of Hindemith’s Cardillac (with Dietrich Fischer-Dieskau in the title role) still rank amongst the most important renderings of these two works ever made.

It was during an operatic performance, of Wagner’s Tristan und Isolde at the Nationaltheater München on 20 July 1968, that Joseph Keilberth died from a heart attack, on the upbeat of the words “Nun stürben wir, um ungetrennt”, having felt unwell the entire day and additionally worried by the incompetence of the singer of Tristan who missed his entries and sang the wrong notes.

Keilberth’s commercial recordings were, from fairly early on, made by the Telefunken recording company (now part of the Warner group); he remained (with very few exceptions) faithful to the company until 1963. But while several of his radio broadcasts have meanwhile been released on CD, several of the Telefunken studio recordings (particularly those prior to 1953) have remained unissued or issued only in some kind of distorted form. The present CD is in a double or triple way coherent. With his later Reger recordings for Telefunken from 1955 and 1962 respectively, Keilberth offered benchmark recordings that have long remained unsurpassed. Yet his credentials as an important Reger conductor go back to his Prague period (in Karlsruhe he had not had sufficient opportunity to perform music of the fellow-Upperpalatinatine composer); the recording of the Four Tone Poems after Arnold Böcklin, Op. 128 of 1913, was the second of the work made (the other one being conducted by Hermann Abendroth, in 1941), and his rendering of the Mozart Variations, Op. 132 of 1914, had only been precursed by Karl Böhm’s 1937 Dresden recording and Hermann Abendroth’s incomplete 1941 recording for Disques Gramophone, lacking the fugue (PASC 256; Fritz Busch’s 1919 attempt in Stuttgart had been abandoned after a few takes). The course of time prevented a release of the 1944 recording, which has survived only on tape in the Deutsches Rundfunkarchiv, Frankfurt am Main.

The early releases of the shellac 78 recordings of Hugo Wolf’s Italienische Serenade (in fact only the opening movement of an otherwise unwritten work) had on their label, next to the composer’s name, “arr. Max Reger”; in fact this is wrong as Reger only prepared the posthumous first edition of the work for his publishers Lauterbach and Kuhn in 1903; a few months later he worked out a version for piano duet. This was only part of his substantial work on behalf of Wolf’s musical estate, which occupied him for several months not only as an editorial task, but which involved him emotionally as well. And it was ten years later, in 1914, that Reger transcribed four Hugo Wolf lieder for voice and orchestra (published by C. F. Peters), taking up the tradition which Wolf himself had established from 1889 with no less than 26 orchestrations of his own piano lieder which had been printed from the estate by C. F. Peters in 1904.

Keilberth’s special qualities as a conductor – penetration into the depths of the work, creative willpower and constant awareness of the overal concept – come into their own in the present recordings. He occasionally proves to be ‘more robust’ than other conductors, i.e. not the beautiful sound in itself, but the organic freshness of the approach is of importance. There may be imprecisions in detail, but his readings are never uninvolved. Keilberth offers immediately compelling, emotionally charged performances that are very far from the ‘well-pressed’ ideal of the hi-fi era, but convince with their strong coherence and emotional depth. These early recordings are even stronger in terms of freshness, emotional density and creative purposefulness than Keilberth’s later Reger recordings from 1955 and 1962; at the same time, the density and tension of the interpretive grasp in the two Reger works has been preserved even over the two years that the recordings were made apart.

XR Remastered by Andrew Rose
Cover artwork based on a photograph of Joseph Keilberth taken in 1938
Special thanks to Dr. Jürgen Schaarwächter.
Produced in co-operation with the Max-Reger-Institut, Karlsruhe, Germany 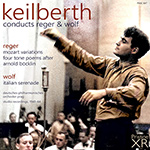