"ALBAN BERG, that great romantic avant-gardist of his day, was the first of the modern Viennese school to get a wide circulation and — inevitably — the first to be set aside. Or almost. Berg is not quite yet out of the picture, thanks especially to Robert Craft and Bethany Beardslee on a two-disk Columbia album of Berg's music (M2L-272; stereo M2S- 620).

What happened, of course, was that Berg lost ground with “advanced” musical taste without ever having quite entered the repertory (although “Wozzeck” still holds the stage quite well In some German theatres and is, one hopes, not yet finished at the Met). Berg was presumably not inclined toward maximum discipline, yet he was certainly precise and fastidious in his musical thought; he worked for top expressive intensity and density and then tried to reconcile this with tonal thinking. Unfortunately, all this quite eliminates him from the small and elect company of ancestors and anticipators of today’s avant-garde.

The fallacy here is an easy one—confusion of historical significance with intrinsic value. Berg may be utterly useless for reconstructing the twentieth century, for showing a direction for young composers to follow or for providing interesting subject matter for metaphysical articles in new-music magazines. But Berg is Berg and his music was made and is. One can perhaps illuminate his work from the viewpoint of the present but in the end it stands or falls on its own soundness and viability.

Mr. Craft, also the author with Miss Beardslee of the recent fine recording of the Berg “Altenberg" songs, knows all this quite well. Again he has turned in a fine and impressive achievement that shows his awareness that Berg has a subtler and more sophisticated discipline than he is sometimes credited with and a clear sort of musical thought that only requires an intelligent performance to elucidate. What one remembers as a murky, introverted expressionism turns out—under proper treatment — to be a hand-some, rational, expressive musicality.

Nowhere in the album is this more striking than in the performance of the Concerto for Violin, Piano and Thirteen Winds, often a blob of dissonant sameness, but here it is a beautifully articulated and phrased work of scope and drive. Israel Baker and Pearl Kaufman, the excellent violinist and pianist, are superb soloists and fit into a conception that is integrated and perhaps surprising for its variousness, its lightness and wit as well as its tension and powerful play of musical forces. Equally exceptional are the performances of the 'concert aria’ Der Wein and Seven Early Songs, both for voice and orchestra, both rare and enhanced by the exquisite singing and superb musicianship of Miss Beardslee."

These superb recordings, transferred from mint copies of the stereo Columbia LPs and further enhanced here with XR remastering, bring together a stunning collection of recordings made by Robert Craft in New York and Hollywood in 1960. It is unfortunate that there was not space on this single disc for the Seven Early Songs, and I hope to include these in a future release for Pristine. 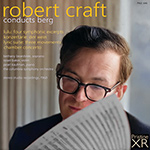