"The performances reveal the qualities that made Monteux such a beloved figure in Europe and the United States for many decades. He was one of those rare conductors who could make a performance sound special without any specific interpretive idiosyncrasy. There is nothing in his music-making that calls attention to itself, and yet the listener is completely drawn into the music’s spell. Monteux himself has been quoted as saying “I have no interpretation; I play the music.”

Clarity of texture was one of his principal virtues. Monteux took great care in balancing different voices so that everything sounded in the right proportion to everything else. Several orchestral musicians who played under Monteux spoke to me with a reverence towards him that is reserved for very few conductors. More than one musician said something like, “You always gave him everything, because his technique was so clear and because he treated the orchestra so professionally.” There is a particular degree of intensity in the playing here because of the relationship between Monteux and the players, but moreover because of the momentous nature of the occasion...

Throughout, the NBC Symphony plays remarkably well, especially considering that this was its inaugural concert as an ensemble, and that it had been assembled and trained in only a few months. Pristine maintains the sense of history by including the opening and closing radio announcements (tracked separately), but they omitted the announcements between pieces in order to fit the concert on one disc. Beyond is historical significance, this is a shining example of one of the 20th century’s great conductors heard at his best."

The first few concerts broadcast by the NBC Symphony Orchestra in the autumn of 1937 were somewhat unusual in their programming: one senses a need or desire to cram as much as possible into the available air-time, at the expense of allowing for longer works to be played in their entirety. Thus the second concert features no less than six different works, but only half a symphony - we get just the second and third movements of the first Sibelius symphony rather than the whole thing. (N.B. The apparent reversal of the fifth and sixth movements of the Handel is not a typo - Monteux re-ordered the Concerto Grosso for this performance.)

Perhaps this is still an orchestra being put through its paces. Having been initially set up by Artur Rodziński, who took the early rehearsals at the request of Toscanini, of the six concerts given before the Italian maestro took charge of his orchestra on Christmas Day 1937 with a concert that featured two full-length symphonies, Pierre Monteux was drafted in to conduct the first three broadcasts, Rodziński being unavailable due to prior commitments to his Cleveland Orchestra. The match was a happy one, and Monteux would return the following spring for two further concerts.

This second concert has not survived in quite as good condition sonically as the first - it arrives surprisingly varied: though never especially poor the sparkle is missing in the upper frequencies at times, though at its best it's very good for 1937. Again I've had to cull announcements during the concert in order to keep everything with the duration available to me on a single CD. 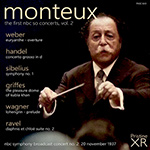