I have admired the work of many conductors during my long career . . . But I think that of all those I have heard I would nominate Alexander von Zemlinsky as the all-round conductor who achieved the most consistently high standard, and that is a mature judgement. I remember a performance of the “Marriage of Figaro” by him in Prague as the most satisfying operatic experience of my life.

For today’s listeners, the name of Alexander von Zemlinsky is most often associated with such late-Romantic era compositions as theLyric Symphony, the massive tone poem,Die Seejungfrau (The Mermaid), and the opera Der Zwerg (The Dwarf). But this focus on Zemlinsky as composer only dates from the 1970s onward, as his output was rediscovered by a new generation of concert goers and record collectors. For most of his later career, and for decades after his death, Zemlinsky was primarily remembered as an opera conductor who left a small number of recordings made in the late 1920s and early ‘30s. The present release, issued on the occasion of the 150th anniversary of Zemlinsky’s birth (14 October 1871), brings together for the first time all of his extant recordings, including two titles unpublished on 78 rpm discs.

Zemlinsky was born in Vienna and was accepted into the Conservatory there as a piano student at the age of thirteen, where he also studied composition under Bruckner. His early works showed the influence of Brahms, who became an influential supporter. In an amateur orchestra he had founded in 1895, Zemlinsky met Arnold Schoenberg, who was to become his close friend, student (in counterpoint) and brother-in-law, when he married Zemlinsky’s sister.

Zemlinsky’s reputation as a composer began to rise with the success of his Second Symphony at its Viennese première in 1897. Three years later, Mahler conducted the first performance of Zemlinsky’s opera, Es war einmal (Once Upon a Time) at the Vienna Court Opera. It was around this time that Zemlinsky took on Alma Schindler as a composition student. The two began a romantic relationship which she ended, subsequently marrying Mahler in 1902.

Zemlinsky served in a number of conductorial positions, first in Vienna, then from 1911 to 1927 at the Deutsches Landestheater in Prague. In 1924, he moved to Berlin, where he continued to teach and also conduct at the Kroll Opera, until the rise of the Nazis in 1933 forced him to return to Vienna. Following Schoenberg, he moved to America in 1938, but found few opportunities there. He died in Larchmont, New York in 1942.

What strikes modern listeners about his recordings is their directness and lack of the sort of willfulness commonly associated with conductors of his era. In a previous reissue of some of these recordings, musicologist Helmut Haack wrote: “Zemlinsky’s approach is analytical. He brings each and every theme to life according to its own character so that each interpretation seems the definitive one . . . By this means, Zemlinsky exposes the formal structure of each piece. Scrupulous attention to every detail without detaching it from its context allows him to approach Flotow and Maillart as whole-heartedly as classical composers such as Mozart and Beethoven.”

Zemlinsky’s published orchestral recordings have been reissued on CD twice before, first by Koch-Schwann, and later by Archiphon. The latter included the first release of one version of the Freischütz Overture, transferred from a tape source so dim and muffled as to be almost unlistenable. The operatic accompaniments have been issued on various CDs associated with their singers (on Preiser and Supraphon), except for the Gerlach-Rusnak sides, which have only been commercially reissued on LP. The Fledermaus Overture and one version of the Freischütz make their first appearances on this release.

Special thanks to James H. North and the Yale Collection of Historical Sound Recordings (Mark Bailey, director) for providing source material, and to Oliver Wurl for discographic information.

Cover artwork based on a photograph of Alexander von Zemlinsky 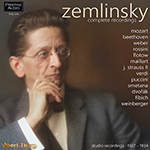