This set of three volumes (two double CDs and a single) brings together the official RCA releases of Toscanini’s late 1940s and early 1950s Beethoven symphonies, with one notable substitution. The 1952 recording of the Ninth Symphony was released on Pristine as PASC120 in 2008. Rather than revisit it we decided instead to use the 1948 recording that was broadcast as an early telecast. It’s a less well-known performance, and one which has benefited greatly from the Pristine XR treatment, as indeed have many of the official RCA releases.

I have attempted across these volumes to find a continuity of orchestral sound quality that is audibly missing in the RCA issues. In each case, with the exception of the substituted Ninth, the symphonies were recorded by Toscanini with his NBC Symphony Orchestra in Carnegie Hall, either in live or studio recording situations, and as such one might expect a consistency of timbre. XR remastering allows for this, using the concept of tonal re-balancing to iron out the inconsistencies of the original recordings.

The recordings and performances – that Ninths excepted – are very well-known, and it’s hard to hear or describe them anew. Rather than attempt to do so, I came across this review in The Gramophone of July 1958, which covers the entire vinyl series as issued in the UK. Due to the limited space available this will by necessity be reproduced across the three CD inserts, but can be read in full on our website at the page dedicated to each volume’s release:

The Beethoven symphonies are the staple of the gramophone repertory no less than of the concert hall. Over the years the Toscanini versions have achieved a classic stature rivalling that of the old Weingartner set. And with good reason: for the forcefulness, sometimes almost the ruthlessness, of the Toscanini style is ideally suited for Beethoven. Where, in other music, the style sometimes seems distinctly less suitable, it is easy to be discovered muttering darkly that he is playing it "like a Beethoven symphony".

The integral LP set was made entirely with the N.B.C. Symphony Orchestra, a body of fine and finely disciplined players who responded to their conductor with tremendous verve and precision, but not always with any very great winning individuality of solo playing. This, no doubt, was all part of the Toscanini style, with which it is most certainly compatible. Less obviously compatible with the style was another general defect of the series that at times seemed, at least on this side of the Atlantic, incomprehensible: the maintenance over a long period of a standard of recording well below the current average.

The series has now been reissued, complete but with each disc separately available, by R.C.A. In general, substantial improvement in sound has proved possible. Each sleeve, indeed, is labelled "A New Orthophonic High Fidelity Recording"; but this description (if it means anything at all) is surely over-optimistic. Certainly the new surfaces are everywhere first-class; yet many of the tapes have a heavy background, not helped by an emphasis of the bass in reproduction usually made necessary by a lightness here in the original sound. And the fidelity of this sound in itself still varies substantially from one symphony to another. At its best, it offers what is probably the richest and most compelling version of Toscanini's Beethoven we have ever been able to hear on disc. At its worst, it is distinctly less happy.

The couplings of symphonies not occupying a complete disc have been changed from those of the previous H.M.V. pressings in order to provide a chronological sequence.

Thus R.C.A. RB16101 now couples Symphonies Nos. I and 2; both of them, as recordings, among the best of the set. The performance of the First, too, has every virtue - unless perhaps to anyone who, insisting on some degree of relief to the tension, thought it imperative to ease up a little for at least the trio of the minuet. The Second Symphony goes equally well; the performance is a model expression of a forceful view of the work.

The Eroica is on RB16102. Here Toscanini follows Beethoven in his more lyrical moments perhaps rather more readily, and gives a most moving performance, marred only by an uncertain sound to the horn-playing in the scherzo's trio. But the recording is not the equal of the performance; it is boxy - though not, happily, throughout in a degree you might well fear from hearing only the opening two chords, if that is the word for such confined explosions.

RB16103 couples the Fourth and Fifth symphonies. The Fourth offers another completely convincing performance, with a beautifully lyrical reading of the slow movement; and the recording is acceptable, with less surface trouble than previously. On the whole, the Fifth, I think, is not quite so successful. The fierce music, it need hardly be said, receives a fierce performance, and the effect is certainly impressive; but the recording is sometimes. unduly thin. (At the beginning of the slow movement the bass of the music is simply missing.)

The Pastoral comes on RB16104. Here the recording is rather good, save only perhaps at the climax of the storm; and the performance has many virtues indeed. The brook may seem to some listeners to be flowing rather fast in the second movement; but if this is so it is surely preferable to stagnation. There are, of course, already many outstandingly good Pastorals in the catalogues; this one comes very close to joining them.

The Seventh symphony, RB16105, suffers from a generally poor quality of sound, becoming harsh and distorted at the more powerful orchestral moments. These occur frequently, not only because of the nature of the music, but also because of the undoubtedly Olympian qualities of the performance. Most listeners, however, will probably need to exercise some considerable degree of resolution in order fully to enjoy them.

Much less resolution, fortunately, is necessary for enjoyment of the Eighth symphony. This is rounder-toned, and in general boasts one of the better recordings of the R.C.A. series. Yet the symphony itself is above all that one of Beethoven's series that demands some relaxation; and though this is of course forthcoming from Toscanini to some extent, yet the necessary amiability does seem to come more easily to some other conductors.

The Eighth symphony is on one side of RB 16106, coupled with the first movement of the Ninth*, itself completed on RB16107. The Choral adds to the orchestral forces four soloists, who are all in varying degrees inadequate, and the Robert Shaw Chorale, who sing well and are not. But although Toscanini gives a tireless and fully convincing reading of the monumental work there is a further, non-vocal obstruction to the performance making its full effect: a recording which, never really very bright, tails off at the end in a degree of distortion not to be found in the earlier H.M.V. pressings.

Nevertheless as a whole this series is a most valuable reissue. The best of modern recording is in the nature of the case not to be expected; but we must be grateful to R.C.A. for allowing us to hear much of the Toscanini Beethoven in the best physical sound hitherto possible. And it is, in general, a marvellous Beethoven: relentless, often, yet always at least a convincing view of the music. And less seemingly relentless, perhaps, in normal, sane life, than when chain-listening to the nine symphonies on end: a lunatic undertaking not at all calculated to show each work, or each performance, in its best light.

These works, I know, need no description, the performances little. But the recordings do vary quite considerably, and it might be useful to end by suggesting a single disc for the man who cares very much what his gramophone sounds like, yet, most understandably, feels that this classic Toscanini set must at least be represented in his library. He might well choose RB16101 - superlative performances, decently recorded, of the First and Second symphonies.

*The alternate Ninth Symphony heard in the present release was the live TV broadcast transmission of 3 April 1948, the second of ten telecasts and the only Toscanini Beethoven Ninth to be broadcast from Studio 8H rather than Carnegie Hall. Dramatic improvements have been made in sound quality here, though there is noticeable treble drop-off at the ends of disc sides. This was the first time Toscanini worked with Robert Shaw for a broadcast – Mortimer Frank states that Toscanini considered Shaw “the finest choral conductor he worked with at NBC”. 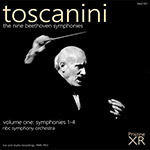