"I'm very fond of Russian music" Stokowski would often say in interviews and, as with so many contemporary composers during his long career, he was a foremost champion of the Russians, frequently performing works by Rachmaninoff, Shostakovich, Prokofiev, Khachaturian, Scriabin and many others. He was also an advocate of Stravinsky's music, withThe Rite of Spring, Les Noces, Oedipus Rex,The Song of the Nightingale and the Symphonies of Wind Instruments all receiving their US premieres under his direction.

On Philadelphia Orchestra 78s too, he made the first US recordings of The Rite of Spring and Petrushka, from which he devised the colourful Suite heard here. However, it was The Firebird Suite which appealed to Stokowski the most. He recorded this work no fewer than eight times, starting with an acoustic set in 1924 (PASC192, also featuring Fireworks). Incidentally, he occasionally added the effective clang of a tubular bell at the start of the "Infernal Dance," as in the brilliantly played NBC performance on this CD.

Tchaikovky's 4th Symphony also featured in Stokowski's list of numerous disc premieres, its first American recording having been made with the Philadelphia Orchestra in 1928. He was to re-record it for Victor two days after the broadcast heard here in a 78rpm set that has been described as "fiery and impetuous" and even "wilful," words that are also applicable to the preceding live performance.

Rimsky-Korsakov was also much in Stokowski's repertoire, with Scheherazade excerpted on acoustics (PASC476) and recorded five times thereafter. He made the first American 78s of the Russian Easter Festival Overture in 1929 and this he also re-recorded with the NBC Symphony for Victor shortly after its 1942 broadcast. However, for this performance he made a colourful emendation. About half-way through, Rimsky-Korsakov directs a solo trombone to depict the chanting of a Russian Orthodox priest during an Easter service. At this point, Stokowski decided on what might be called the "authentic" touch and engaged Nicola Moscona to intone the Old Slavonic text instead. On the other hand, in the case of the dazzling Spanish Caprice, Stokowski rather curiously didn't get round to recording this work commercially until 1973, a few months before his 91st birthday!

However, it is Tchaikovsky who occupies a major portion of Stokowski's discography and we conclude with the 5th Symphony. He recorded the second movement acoustically in 1923 (PASC441) and one of his commercial LPs - taped in 1953 with his own special team of top-flight New York musicians - can be found on PASC188. The same adjectives that have described Stokowski's reading of the 4th Symphony can also be applied to the 5th. Small cuts in both will be noted, though abridging Tchaikovsky in those days was quite common - witness Toscanini's deletion of over 100 bars from the Manfred Symphony's finale! Nevertheless, in Stokowski's hands, the NBC Symphony gives these Tchaikovsky symphonies virtuosic performances as visceral, intense and as passionate as they come. 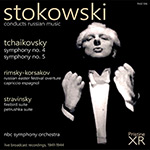