Pierre Monteux only gave four broadcasts with the Philadelphia Orchestra: two in January, 1945 (the latter of which included the Mendelssohn Violin Concerto with Isaac Stern that appears on PASC 519), one the following October, and the last, broadcast and recorded in stereo, on March 4, 1960. The first of these featured Prokofiev’s Suite No. 1 from Romeo and Juliet, broadcast on 6 January 1945.

Only the first six numbers from the Prokofiev Suite were broadcast, probably due to timing reasons. (This series of broadcasts were done as one-hour programs in an empty hall between 6:00 and 7:00 p.m. on Saturday nights preceding the regular subscription concerts at 8:00.) The seventh number, "Tybalt's Death", was omitted. It's the only Monteux recording of the work that we are aware of. He never recorded any Prokofiev commercially, and the only other known live broadcast of his music is the "Classical" Symphony with the Boston Symphony in a West Hill Radio Archives release.

The 1960 broadcast from WFLN-FM features three works, two of which Monteux did not record commercially (the Hindemith Mathis der Maler Symphony and the Schubert 9th), along with the Brahms Tragic Overture, which he did record in the studio but which wasn't released until decades after his death. We have opted to preserve the order in which the pieces were performed in the 1960 concert, and retained the announcements. All the recordings were made in the Academy of Music.

As with the Stokowski Philadelphia Orchestra broadcasts of 1962 (PASC372 & PASC379) the musical content of these recordings was preserved separately to the applause and announcements, and in a different stereo format normally reserved for broadcasting. I’ve employed cross-fades where possible to reduce any sense of a jump from one to the other, but sharp-eared listeners may still detect this.

The 1960 Philadelphia recordings have survived exceptionally well on magnetic tape reels for the last sixty years, and sound quality is superb throughout. By contrast the 1945 acetate discs which preserve the Prokofiev recording have inevitably suffered some wear and damage since their creation, and this will be heard from time to time where it has proved impossible to eliminate in its entirety. I have retained as much of the pre-and post-announcements here as possible, though unfortunately very little remains. Nevertheless, despite these caveats, this remains a hugely enjoyable performance and a vital addition to the Monteux catalogue. 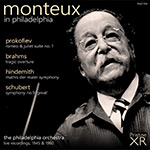 Pierre Monteux, last of this season’s guest conductors substituting for the vacationing Eugene Ormandy, took the helm at Friday afternoon's Philadelphia Orchestra concert in the Academy of Music.

Probably as an aftermath of Thursday's snow blitz, the audience was relatively small.

Monteux, as few need be told, is one of the best-known and most admired musical visitors in these parts because of his many appearances in the Academy and Robin Hood Dell.

Rotund, benign of countenance, and with his silvered walrus mustache drooping, the distinguished octogenarian maestro stepped briskly on stage to be warmly greeted by the audience. No less cordial were the orchestra players, who stood in the guest’s honor.

Making no concession to his 85 years save for a temporary railing erected to help him on and off the podium, Monteux presented a well-chosen program with veteran aplomb. The visitor, one of the grandest of the grand old men of music of our time, is obviously liked and respected by Dr. Ormandy’s players, and they gave him even more than their usual expert support.

The afternoon opened with the Brahms “Tragic" overture. Then came Paul Hindemith’s suite from his opera “Mathis der Maler,” which dates from 1934 and was considered pretty avant garde in its day. But like much of this authentically gifted composer’s works, it has worn well and found its own level brilliantly over the years. Almost a semiclassic in the repertory now, “Mathis” is as accessible today as, say, late Richard Strauss or early Schoenberg.

A colorful and graphic tone poem in three parts, the suite was inspired by the religious paintings of the 16th century German master Mathias Grünewald.

With its resolved dissonances, fragmentary but expressive themes and dramatic chromaticism, it was given a splendid publication that won the maestro prolonged applause.

The last half of the bill was entirely devoted to the “heavenly length” of the Schubert Seventh Symphony. That superb classic, the “Great” C major, with its enchanting melodies and infectious rhythmic pulse, was heard in a performance bright with intelligence, warm with understanding and validated by first rate musicianship. It won Monteux an extra ovation.