"Of the more heroic of Beethoven's symphonies Beecham would give performances that were always interesting and often exciting, if not in the end wholly satisfying, but this one  suited him to perfection and here is a performance full of affection and with the real Beecham touch to it. Again and again I found myself smiling with pleasure at some distinctive, yet wholly justifiable, bit of phrasing or characterisation. To mention only the most obvious one, the bird cries at the end of the slow movement aren't just "played", as they almost always are; each bird is given its own character. The peasants make merry at a very swift speed (so those who admire Klemperer in this may disapprove) but the only movement I didn't wholly enjoy was the last, which Beecham chooses to make boisterous instead of peacefully flowing. The sound of this record is remarkably good, so good that it conveys Beecham's interpretations perfectly adequately (though you may find you want to play the first two movements of the Pastoral at a higher level than the rest of it). If you haven't already got Beecham's … Pastoral performance, this is the moment not to be missed."
- The Gramophone, 1961, on Beecham's Beethoven Symphony No. 6

"It would be hard to achieve a more graceful or spirited performance of this work than Beecham does: the tempi are just right, the balance is admirable, and there is some lovely horn tone in the Trio of the Minuet"
- The Record Guide, 1955, on Beecham's Beethoven Symphony No. 8

Sir Thomas Beecham was not particularly well-known for his Beethoven. Naturally over such a long career he conducted many performances of the composer's music, but the recorded canon is remarkably light for such a well-recorded conductor and such a major composer.

Of the four symphonies presented here, recorded across the final decade of Beecham's life, Symphonies 6 and 8 comprise his only recordings of these works. The 7th he recorded twice, the 2nd three times. We do not have a complete cycle of Beethoven symphonies from Sir Thomas.

The earlier recordings here, Symphonies 6 and 8, were recorded in mono in 1951 and 1952, and have the most to gain from XR remastering and Ambient Stereo processing, both of which bring a fabulous sense of space and realism to some previously rather dim recordings. The 2nd and 7th recordings benefit from being full stereo recordings to start with, and both offer quieter background noise and finer quality, further enhanced in this new edition. 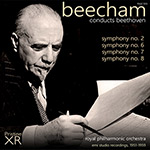