Although Stokowski never recorded a complete Beethoven cycle, several of the nine symphonies remained firmly in his repertoire during his long conducting career. He played a Beethoven work for the first time in 1909 when, at the age of 27, he conducted the Cincinnati Orchestra in the 5th Symphony. Sixty-five years later, aged 91, he performed Beethoven's music for the last time when he gave an LSO concert that included the 8th Symphony and the "Eroica," both hailed by one critic for their "striking and imaginative performances."

Stokowski was among the first conductors to record many works that were - and are - part of the regular concert repertoire. His first Beethoven disc, recorded acoustically in 1920, was of the 8th Symphony's "Allegretto Scherzando" (PASC192). With the advent of electrical recording, he and his Philadelphians made the first American 78s of the 7th Symphony, an exhilarating performance described by Mark Obert-Thorn as "a reading of immense vitality and rhythmic propulsion" (PASC483).

Next came the Beethoven 5th in another American "first" - a specially recorded performance designed to introduce RCA's "Program Transcription" LPs in 1931. They couldn't have been worse timed and as a result of the great depression soon died a death. Then in 1934, Stokowski made the first American recording of the "Choral" Symphony. Seven years later, in 1941, he was given a three-season contract to take over the NBC Symphony during Toscanini's temporary withdrawal and it was Beethoven's 9th Symphony which featured in his second NBC concert (PASC541).

The NBC Symphony's players were of course used to performing Beethoven under Toscanini's direction and after his year's absence, the great Italian maestro returned as Stokowski's co-conductor. This arrangement prompted critic David Hall to comment that "the most spectacular combination of performances and programming were the two Toscanini-Stokowski seasons."

"Spectacular" is a word that can readily be applied to the performances heard here, particularly the Beethoven 5th. The "Pastoral" Symphony in this 1942 broadcast is now the earliest complete Stokowski performance on record, the "Fantasia" soundtrack version having been much abridged. As to the 7th Symphony, Stokowski felt that something stated strongly just once could be weakened by repetition, so he followed the precedents set in other Beethoven symphonies by omitting the second appearance of the Trio in the third movement.

Finally to Wagner, whose "Prelude and Liebestod" followed the Beethoven 7th in the 1942 broadcast heard here. A one-time church organist, Stokowski clearly enjoyed pulling out all the stops! 'Parsifal' was the only Wagner opera that he conducted complete, with a Philadelphia concert presentation in 1933. He also began making "Symphonic Syntheses" of Wagner's music dramas and the "Good Friday Spell" is followed by one of these arrangements. It is music from Act 3 evoking the world of the Knights of the Holy Grail and in this 'live' broadcast, Stokowski brings in a chorus from the opera's final pages. It is a wonderful effect not realised in his three orchestral recordings of the 'Parsifal' "Synthesis" and thus makes this performance unique in his immense discography. 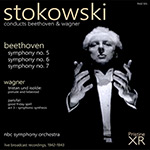