Though Furtwängler conducted all five of Beethoven’s piano concertos, as well as the Triple Concerto for Violin, Cello, and Piano, only recordings of the First, Fourth, and Fifth Concertos have survived, and it is in the Emperor alone that he collaborates with a peer, Edwin Fischer. The loss is keenly felt in the First Concerto and in the wartime performance of the Fourth Concerto, for Furtwängler’s conducting in both instances is extraordinary—bold and buoyant in the First and passionate and arching in the Fourth.

More might have been expected of Hansen’s performance of the Fourth Concerto; he was Fischer’s pupil and teaching assistant. But at times his shaping of phrases is unaccountably harsh, and many details (some important pianissimos and sforzandos, for example) go by the wayside. Hansen plays the first cadenza as written for a little more than four dozen bars, and then takes off on his own, enlarging his solo moment with new material (presumably of his own making) built on the opening theme. He eventually returns to Beethoven, but only for a few bars before he recasts the ending.

Unlike [his] soloists, Furtwängler is marvelously attuned to both works and plays them as ripe, full-blown romanticism rather than belated classicism. Chords are full and allowed to resonate, and in the First Concerto he gives the trumpets and timpani a triumphant prominence. Most compelling of all is his 1943 conducting of the slow movement of the Fourth. This visionary section is often conceived in an overly secco manner, clipped and impersonal. Nothing could be further from Furtwángler’s concept. The recitative figures in the orchestra are weighted and tightly bound; staccatos are felt but not exaggerated, and rests become expressive breaths within phrases.


In Furtwängler’s hands, the Pastoral became remarkably expressive clay, to which he brought a plasticity vouchsafed no other conductor. There is a clarity to his performances (including the few prosaic ones) in which every note speaks. Even while weathering the storm of the fourth movement, Furtwängler’s performance conveys a feeling of chamber rather than symphonic music and always implants a sense of serenity and well-being. Textures are transparent, bowings are light and subtle, and dynamics are carefully monitored. A fortissimo here is not the same as one in the other symphonies, the Third or Fifth, for example; it is more a matter of weight than decibels, with accents more a surge than a sharp delineation. It is only with the third-movement scherzo that the music grows in girth and momentum, as clouds start to gather at the end of the movement.

As Furtwängler shepherds us through the Pastoral, we feel it as a two-part work, a division that is, of course, implied by Beethoven in his linking of the final three movements. Furtwängler all but joins the first two movements in performance. He waits only long enough to clear the air of F major before lifting us into the sub-dominant key. Yet in this brief pause, music seems to flow through the silence. He also reinforces the two-part feeling by downgrading the first-movement allegro ma non troppo to a gait that meshes with the andante molto mosso of the second movement. 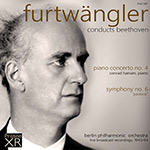