The present release completes Pristine’s survey of Arturo Toscanini’s recordings with the Philharmonic-Symphony Orchestra of New York begun with PASC 575, featuring every take published on 78 rpm as well as several items never released in that format. This volume presents a take of the Prelude to Act 3 of Verdi’s La Traviata which has not been available since the shellac era, as well as the first release of the finale of the Beethoven Fifth Symphony from an otherwise unissued live performance.

Toscanini’s first recordings with the ensemble then known as the New York Philharmonic were made during his earliest appearances as guest conductor in 1926. The Brunswick label assembled 74 players from the orchestra in a small venue (unidentified on the ledgers, but said to be the fifth-floor Chapter Room within Carnegie Hall) to record two excerpts from Mendelssohn’s incidental music for A Midsummer Night’s Dream using their proprietary “Light-Ray” electrical process. The resulting sound was clear (even preserving a player’s cough during the Scherzo), if a bit overloaded at climaxes.

Three years later, Toscanini, who was now co-conductor of the orchestra which had in the interim been merged with Damrosch’s New York Symphony, revisited the Mendelssohn Scherzo to produce a supercharged reading which shaved a half-minute off his earlier running time for this short piece, a clear demonstration of the virtuoso ensemble he had honed. A Sorceror’s Apprentice recorded during these later sessions had a similar breathless excitement; yet the broader tempi and more elastic phrasing that characterized the Maestro’s conducting style during this period was well documented in his recordings of the Orfeo Dance, the two Traviata Preludes, and the Barber of Seville Overture.

A word is in order at this point about the alternate takes. In the early days of electrical recording, it was common for the Victor label to make at least three takes of each side. One would be chosen as the master, with the others marked to be held or destroyed. During the early 1940s, Victor replaced the originally-issued takes on many of its best-selling recordings due to wear on the metal mothers which were used to grow new stampers. Several Toscanini recordings experienced substitutions of this nature, some (as seen in this volume) having more than one alternate take published. While the alternates are usually fairly similar to the originally-published versions, some noticeable differences occasionally appear.

After frustrating experiences in 1929 with the frequent stops and starts of recording on limited-duration 78s, Toscanini vowed never again to make records. Victor, however, was keen on preserving his interpretation of the Beethoven Fifth Symphony. In March of 1931, two live performances were each recorded directly onto nine 78 rpm matrices. The first attempt was deemed unusable, and the second was subjected to sonically-compromising dubbings for all but the last two sides. The end of the first matrix was further degraded with a muffled-sounding insert from the first performance. Not surprisingly, it was rejected by Toscanini. Modern restoration tools have allowed this performance finally to be heard without special pleading for the sound, while the concluding side from the earlier performance is presented here for the first time.

Toward the end of his final season as music director of the Philharmonic in 1936, RCA was able to reach a compromise with the Maestro. Recordings would be made during studio sessions, which would allow for retakes; but they would be taken down without fully stopping after each side. Instead, at pre-arranged points in the score, the conductor would pause momentarily while the next side was begun on a second cutter. The overtures to L’Italiana in Algeri and Semiramide were done in this manner, preserving the forward momentum of a live performance in vivid, almost high fidelity sound.

Arturo Toscanini and the Philharmonic-Symphony Orchestra of New York 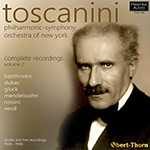