This volume of the Jascha Spivakovsky Bach to Bloch edition features two concert performances with orchestra of works by the two composers whose names have graced this series’ title, closing the circle begun in 2015 with the first ever publication of private recordings of the stupendous Russian pianist who died in 1970 without having produced solo recordings. This particular issue is especially meaningful as it is being released in the 50th anniversary year of the pianist’s death at the age of 73.

The Bach-Busoni Concerto in D Minor BWV 1052 dates from a January 1961 concert given with the Astra String Orchestra (a local ladies’ ensemble) under the direction of George Logie-Smith. This concert took place the same week as Jascha’s release from hospital after a medical emergency and just a few days after the Beethoven G Major Concerto broadcast released in Volume 7. Despite his poor physical health at the time, Spivakovsky rose to the occasion magnificently, as can be heard by his tremendously vivacious playing. Particularly remarkable are the scintillating cadenzas, which are very much in the spirit of Bach’s time. However, he certainly does not replicate the kind of performance one might expect to hear on a harpsichord, instead taking full advantage of the expressive means of the piano with his fluid phrasing, sumptuous tonal colours, and skillful use of dynamic gradations. This is a truly vibrant interpretation that highlights the composer’s brilliant use of counterpoint and beautiful melodic content.

The Bloch Concerto Symphonique comes from a 1951 concert given with the Sydney Symphony Orchestra under Sir Eugene Goossens: the Australian premiere was broadcast on May 15 and Spivakovsky played it several times around the country over the next two years. He had discussed the score with the composer himself while learning the work from the manuscript, lending a degree of authenticity to a traversal that may be the earliest recorded performance of this composition. The pianist plays with verve in this impassioned reading of a work that is incredibly challenging for all concerned (the conductor makes a timing error in the first movement for which Spivakovsky had to compensate)! As always, we hear him playing with beauty of tone, clarity of texture, and elegant phrasing - there is never a harsh sound even when the music has dissonance.

With this final Bach to Bloch release featuring Jascha Spivakovsky as piano soloist, we are more than ever able to appreciate the breadth of this great pianist’s repertoire and the magnitude of his highly individual interpretative abilities. 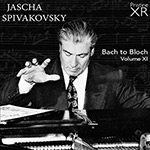